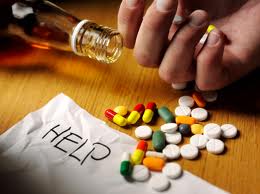 After years looking to curb drug demand through police work and busts, South African is moving to increase access to drug rehabilitation services – signaling a shift in the country’s war on drugs.

Drug-related crimes have almost tripled in the last nine years, according to the country’s latest crime statistics. Meanwhile drugs that many perceive as being urban problems are spreading into small, rural towns countrywide. Once only thought to be a Western Cape problem, crystal methamphetamine, or “tik,” can now be found in provinces like Mpumalanga, which is already struggling to stave use of “nyaope” or “whoonga,” traditionally comprised of heroin and dagga.

Using old forms from the nearby Tholulwazi Pre-primary School, young boys solicit donations and can collect up to R200 a day, according to one boy who did not wished to be named. In return for collecting donations, the younger boys are paid R20 per day.

But the Institute of Security Studies cautions that climbing rates of drug-related crimes are more likely an indication of increased police work rather than spikes in actual crimes.

Cracking down on drug-related crimes in order to control drug supply – and therefore demand – has been a hallmark of the war on drugs not only in South Africa but also globally.

Moving beyond supply in the war on drugs

The Department of Social Development’s Central Drug Authority (CDA) released its latest national plan on substance abuse in July. Echoing UNDOC’s sentiments, South Africa’s latest National Drug Master Plan signals a shift in the country’s drug policy, from one narrowly focused on supply to one that highlights the need for treatment. This includes more government treatment centres and the decentralisation of services to prevent and identify drug abuse and counsel abusers and their families.

“The plan is to increase the number of treatment centres but also to have treatment centres in every province,” said Peter Ucko, CDA’s chair of marketing and communication. “We also want to look after care services because of the high rate of relapse among substance abusers.”

According to CDA Chairperson Mogotsi Kalaeamodimo, the plan aspires to implement the country’s 2008 Prevention of and Treatment for Substance Abuse Act, which mandated treatment centres in every province as well as the creation of public halfway houses. Halfway houses allow recovering substance abusers to live in home where, under monitoring and follow up care, they can begin to re-integrate into society by, for instance, looking for work.

According to Kalaeamodimo, a facility has already been built in Limpopo but is not yet operational.

Major medical aids in South Africa cover treatment in SANCA facilities and the Department of Social Welfare can buy a certain number of days for patients without private insurance and who earn less than R3 000 per month.

Ntombikayise Jojo from KwaNyuswa in Lusikisiki, Eastern Cape began drinking with friends and now can’t stop. She says her addiction has cost her everything.

“I was once married to a very wonderful man who became disappointed by my habit,” she says. “At first when I left him, all I thought was, ‘this was the life I wanted,’ but I discovered later in life that it was not.”

Jojo says she uses alcohol to numb the pain of not only living with HIV but also losing her son. When she’s sober, she often thinks about getting clean.

“I am HIV-positive, which does not bother me unless I am sober,” she says. “When I lost my second-born through his ways in life, I was not that hurt.”

“I did not even cry, but since the neighbours expected me to, I pretended,” Jolo adds. “When I am sober, I tell myself that I want to rehabilitate, but come something to drink, all that is forgotten.”

Alcoholics like Jolo and people addicted to dagga account for most admissions to SANCA’s nine in-patient facilities, but SANCA spokesperson Cathy Vos says that most South Africans who abuse substances are often addicted to multiple substances.

“South Africans are what we call ‘poly-drug users,’” says Vos, who adds that, for instance, tik users often also abuse dagga and alcohol, which they use to “come down” after tik’s high.

Heroin or opiate addictions are the third most frequently abused substance among SANCA patients, followed by tik or crystal methamphetamine

While heroin and crack cocaine are national problems, the Western Cape remains the epicenter of the country’s tik problem. Meanwhile, provinces like Gauteng, KwaZulu-Natal and Mpumalanga are battling with the use of “whoonga” or “nyaope”– traditionally a mix of heroin and dagga.

In the last financial year, SANCA offered in-patient services to about 10 000 patients, the bulk of whom are either referred by loved ones or self-admitted. However, waiting lists do exist.

“For those who face waiting lists, it can be very difficult depending on a patient’s ability to pay,” Vos said. “If you go to a hospital they can probably provide you with medication to assist in detoxification but on it’s own, it’s not very helpful.

“You need individual and group therapy,” she adds. “Rehabilitation centres provide people with a safe environment where drugs are not permitted on the premises and to that end, there are rules and regulations that would be difficult to implement in a public hospital.”

“(Detox) should actually be treated as a medical emergency because the withdrawal period can carry a very high mortality rate,” Naidoo says. “When a patient withdraws from alcohol, or substances like coke or heroin, it can be fatal.”

Patients should be medically supervised and preferably somewhat sedated during this period to deal with pain, he adds.

Naidoo says that, aside from follow-up therapy, patients often also need treatment for psychological conditions such as mood and anxiety disorders, depression and panic attacks that can surface after detox.

For this reason, ARCA conducts intensive follow-up treatment like social workers and psychologists but these health care workers are scarce in the public sector.

According to 2005 figures, there is one psychologist for every 312 000 people in the country.

Decentralisation on the horizon

With a shortage of facilities, beds and specialist health professionals in the public sector, government has partnered with SANCA in moving to try to decentralise prevention and some care – much like South Africa has done with HIV and tuberculosis services in recent years.

SANCA is working in township communities such as Orange Farm, 60 kms south of Johannesburg, to train community health care workers to identify substance abuse and provide counseling and referrals to addicts and families. These health care workers are also being trained on raising awareness and helping former substance abusers re-integrate back into the community following treatment.

“Rehabilitation is a very expensive procedure, especially in treatment centres and outpatient services are sometimes not accessible to the community,” Vos says. “That’s why the Department of Social Development has started to capacitate these community-based organisations to create awareness about substance abuse and assist with the referral of high risk users to treatment facilities for comprehensive assessment and treatment services.”

Kalaeamodimo added that community-based programming is also being piloted in Eldorado Park.