Thousands of children develop cancer in South Africa every year, but scarce facilities and delayed diagnosis mean the odds are stacked against many. 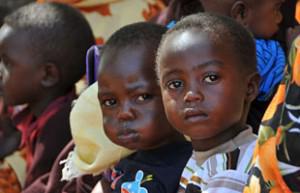 Khanya* arrives toddling at the clinic next to his granny. His tummy is swollen and he wears the sulky face of a child in pain. His gogo Nolumkile* explains to the nursing sister that he has been complaining of a sore tummy off and on for a while.  Baffled by his persistent symptoms, the clinic’s nursing sister refers the child to the district hospital – another long and expensive journey for Nolumkile, and one that probably means an overnight stay.

The district hospital refers the weary gogo and her wailing grandson to Mthatha where the pair wait for space on the ‘oncology bus’ to Frere Hospital in East London. The bus leaves the following day at 4am for the three-hour drive.

Frere Hospital is a beacon of hope, the only state hospital within the Eastern Cape that offers comprehensive management for children with cancer, like Khanya who is diagnosed with a form of kidney cancer called “Wilm’s tumour.”

There are an estimated 2,500 cases of paediatric cancer in South Africa annually, according to Francois Peenz, chief executive officer of the Childhood Cancer Foundation of South Africa. While the country has 12 hospitals that can treat paediatric cancer, these facilities are concentrated in just four provinces – the Western Cape, Gauteng, Free State and KwaZulu-Natal.

Currently, the Eastern Cape lacks any doctors with this specialist training. The inequity in care between provinces like the Eastern Cape and neighbouring Western Cape is just one of the challenges facing children with cancer.

“This limits access to care for children with cancer – for example, patients in the Northern Cape have to travel to a Free State hospital, which means an expensive journey of up to two days each way,” says Peenz, who adds that each additional step or hurdle between a patient and treatment translates into potentially deadly delays. These hurdles can include lack of transport money to and from clinics and a lack of cancer awareness among caregivers about cancer’s early warning signs.

Between children and cures

Khanya must be flown to Cape Town so a specialist paediatric oncologist can assess him and plan his treatment. The nongovernmental organisation Wings and Wishes, which is dedicated to transporting critically ill children, agrees to cover the cost of Khanya’s flight but it’s too late.

“He was in poor condition long before he got here, underweight and malnourished,” says the Frere Hospital’s Dr Barry van Emmenes.

“The poverty in the … area is so great that many children are ill-equipped to face a major disease,” he says.  “Khanya’s little body just didn’t have the resources to cope with the cancer and the treatment.”

“What kills children like Khanya is a vast complex of problems, and we need to tackle all of them if we are to fulfil the promise of new cancer therapies and the improved prognoses of today,” says van Emmenes, who adds that if Khanya’s cancer had been caught early enough, he would have had about a 94 percent cancer of still being alive in five years’ time.

“We almost never get them at that (early) stage,” says van Emmenes, who adds that about half of all paediatric cancer patients who begin treatment in a late stage, or stage IV, will die.

This feature was produced by the Campaign for Cancer. Names have been changed.