The festive season is a difficult time for some people, especially those who have a previous history of mental illness. Photo credit: World Health Organisation/File Photo.

Originally from the Eastern Cape, Finci Vuza raised his girls as a single father after his wife died. Now, his daughters are hoping to find their elderly father’s family before he dies and fulfil his last wishes. 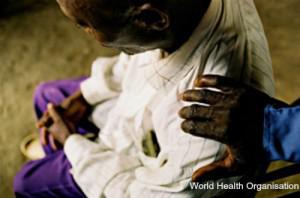 “He wakes up at night, screaming and calling names we do not know,” says daughter Phindile

Now 84 years old and a resident of Stinkwater outside Pretoria, Finci is in poor health, blind and may be suffering from dementia.

Every day, he cries to be taken to his ancentral home in the Eastern Cape to die, say daughters, Phindile and Busi Vuza.

The women know that their father is originally from Mqonci and may have come to Stinkwater in the 1970s, but do not know much more about their father’s past – or his family.

“We are worried because he is sick mentally and we aren’t able to trace his family or know where exactly he comes from,” Busi said. “When he dies, it will be a big problem for us,”

They worry that their inability to find their extended family, fulfil their father’s last wishes and follow traditional custom is taking a psychological toll on their father.

“I am worried because sometimes he wakes up at night, screaming and calling names we do not know,” Phindile told OurHealth. “Maybe if we found his family it would help.”

Some research notes that rituals, such as the return of a body to its birth place following death, may play an important part in helping people and communities better deal with death and bereavement.