Home » Essay: The unravelling of the human rights response to HIV

Penned by public interest law organisation Section27 Executive Director Mark Heywood, this essay was released as part of the International HIV/AIDS Alliance’ report on the state of civil society’s response to HIV. 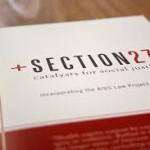 In the 14-page essay Heywood argues that after an exceptional response to HIV, international agencies, governments and donors have retreated from human rights commitments. Billing the essay as a ” short history of the rise and fall of the human rights approach,” Heywood further argues that this retreat might be stalled if civil society organizations take drastic actions to reclaim the political space.

Download the essay: Heywood – The unravelling of the human rights response to HIV

This essay was originally published by the International HIV/AIDS Alliance