In January, the country will introduce a big change in antiretroviral (ARV) treatment for pregnant women with HIV. Health workers in the Western Cape, which has been operating under the new treatment plan for over a year, warn that the change means more than just pills for expecting mums.

Nurses who are able to initiate and manage pregnant women on ARVs, and integrated antenatal and ARV services will be crucial to the national roll out

Early next year, all HIV-positive pregnant women will be advised to start life-long ARV as part of prevention of mother-to-child HIV transmission (PMTCT) services in an approach known as “Option B+.”

Currently, HIV-positive mums with strong immune systems, measured by a CD4 count of 350 or more, only receive ARVs during pregnancy, delivery and breastfeeding to prevent transmitting the virus to their babies. These women must wait until their CD4 counts falls to start ARVs for life for their own health – except in the Western Cape.

The Western Cape moved to Option B+ in July 2013. Women like Nopinky Matinise have been at the forefront of the roll-out of the new treatment guidelines. The province has also ramped up the number of ARV-providing sites and improved how health care workers track mums and babies.

Matinise was diagnosed HIV positive during her pregnancy in 2012.

“I thought I was dying,” says Matinise, who was then linked with the non-profit organisation mothers2mothers. Started in Cape Town, the organisation works across southern Africa to support expecting HIV-positive mums in PMTCT programmes.

“After I met mothers2mothers, I realised I was not dying and I got education,” says Matinise, who gave birth to an HIV-negative baby.[quote float=”left”]“We started seeing more partners coming because they wanted to know what was happening (and) why now women had to take ARVs for life”

But she could not shake the feeling that other mothers were still out there, scared and trying to cope with their HIV diagnoses while waiting for baby. When the opportunity to become a mother2mother mentor and give PMTCT counselling to other women arose, she grabbed it. She now works as a mothers2mothers site coordinator at Site B in Khayelitsha.

She says the move to Option B+ was a massive change for mums and counsellors.

“It changed the way we did our education generally, one-on-one and in support groups,” she tells Health-e News. “We had to make sure our women understood why it was important for them to start ARVs.”

It was especially difficult to get women living with HIV, who had gone through one pregnancy already under different guidelines, to understand why they needed to take ARVs for life although they felt healthy, Matinise adds.

Explaining that starting ARVs earlier would help keep them healthier for longer and decrease their risk of opportunistic infections such as tuberculosis helped, she says.

The mentor mum also says that more men piled into waiting rooms to hear more about what Option B+ meant for their partners.

What comes after “you’re HIV positive” 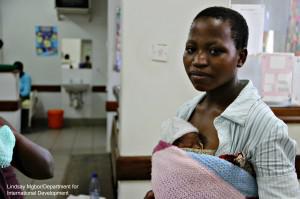 “It’s quite a shock, you’re pregnant, you find out you’re HIV positive and that you have to take treatment for life,” says Ibeto, describing the first antenatal care visit at which a woman is diagnosed and must also be started on ARVs. “She needs a lot of support after starting treatment (before) bringing in all the other messages you might need to bring in.”

“In the first session of counselling, counsellors don’t go into all that is traditionally done in pre-ARV sessions (but) they focus on supporting women to accept their HIV diagnosis,” Ibeto says. “Second to that is creating a written adherence plan on how she is going to take the treatment.”

“It’s very practical and leaves her walking away with a tool, something that she has written herself,” says Ibeto, who adds that the plan outlines what to do if a woman cannot get to a clinic to collect treatment and who will support her in making sure that she takes treatment daily.

To make it work, clinic staff must ensure women get follow-up counselling sessions before leaving the clinic on subsequent visits – and more nurses and midwifes have to be trained to initiate and manage pregnant women on ARVs, Ibeto tells Health-e News.

Lessons from the Western Cape

AIDS lobby group the Treatment Action Campaign (TAC) has welcomed the move to Option B+ but is concerned that weak provincial health systems may not be able to cope with an increased demand on ARV services and drugs, according to Portia Serote, the TAC’s Women’s Sector representative.

Western Cape Department of Health manager for HIV prevention Manjekana Dyeshana, says the province analysed the health system before moving to Option B+ and decided to expand sites that offered ARVs. The province also has a dedicated ARV medicines depot. In countries like Zambia, having a dedicated ARV supply chain has helped to cut down stock-outs.

Both MSF and the Western Cape have also stressed the need for regular viral load testing for pregnant women. Viral load testing measures the amount of HIV in a person’s blood and can help detect when mothers are struggling to adhere to treatment, making them more likely to pass the virus onto their babies.

Dyeshana adds that funding, as well as properly trained professional nurses, pharmacists and admin clerks were all key to the roll-out, which has not suffered high drop-out rates of mums on Option B+ as in Malawi. MSF is currently analysing its data to see if the same holds true in the clinics it supports.

Both Ibeto and Dyeshana say one of the biggest lessons learned in the roll out was the need to adapt ARV patient databases to track mums and babies together.

“The lesson learned was that before you start something big and important like this you have to have structures in place,” Dyeshana says. “Your monitoring and evaluation tools have to be in order.”– Health-e News.