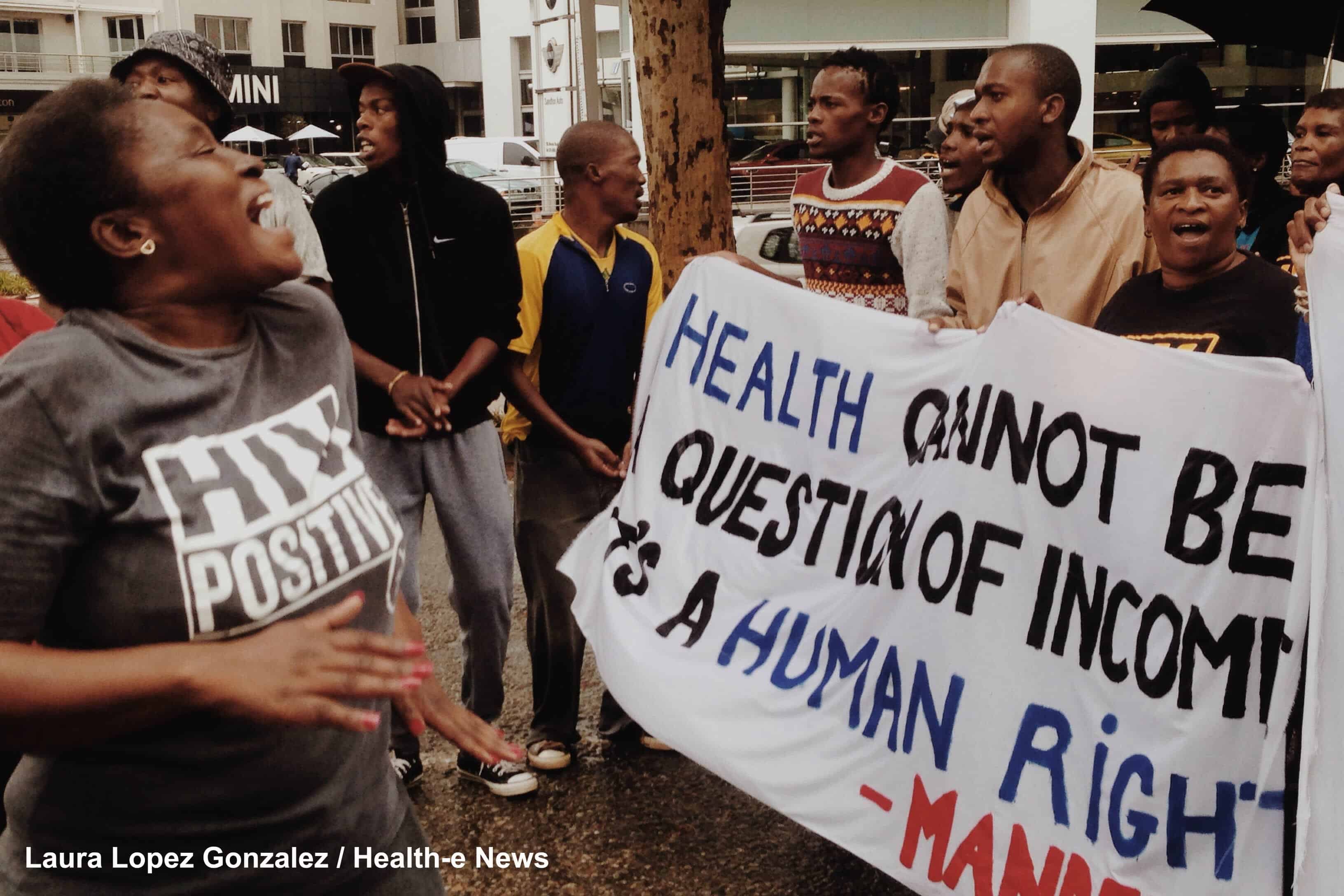 Dozens of activists and patients picketed today outside the Johannesburg meeting of a United Nations high level panel on access to medicines. Activists have demanded governments fund more drug research and development. 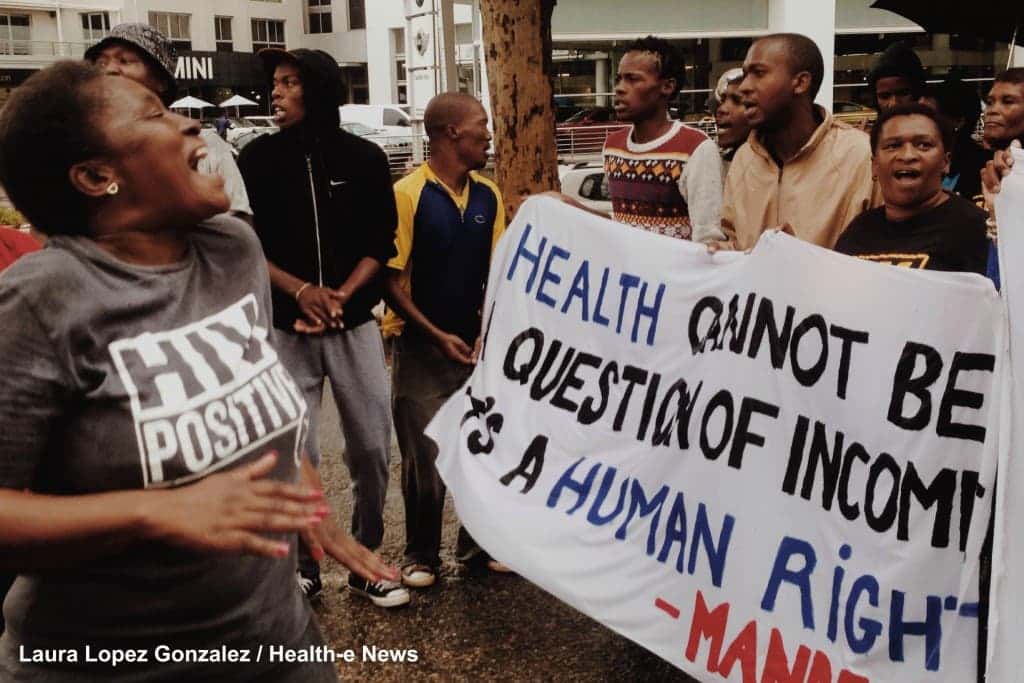 Donning t-shirts emblazoned with the slogan, “No more delays, fix the patent laws in 2016,” about 60 activists gathered outside the Sandton Holiday Inn yesterday where they delivered a four-page letter of demands to members of a high-level United Nations panel. The panel is currently reviewing how the needs of drug innovators can be balanced against patients’ need for affordable treatment. Globally, pharmaceutical companies continue to argue that the need to recoup research and development costs continue to drive high drug prices however activists say this is not always the case.

Among protesters’ demands was that governments fund the research and development of new medicines. The Treatment Action Campaign (TAC) has advocated for this previously especially in regards to developing new tuberculosis medicines.

In South Africa, activists have also blamed a lack of rigorous patent examination for allowing companies to gain unnecessary patents. Improved patent examination is just one of the features that organisations like TAC and the South African Non-Communicable Disease (NCD) Alliance will be hoping to see in the Department of Trade and Industry’s (dti) new intellectual property policy. The dti is expected to release a second draft of a proposed policy soon for public comment.

The have’s and the have not’s 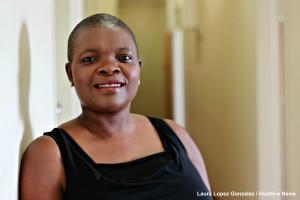 Breast cancer survivor Tobeka Daki is convinced that if she had been given access to the cancer drug Herceptin, her cancer never would have spread.

Among those who picketed were two women fighting to live and another, farther off, fighting to die with a purpose.

Tobeka Daki was diagnosed with HER2-positive breast cancer in 2013. She joined more than 6,000 women who are diagnosed with cancer annually in South Africa.

About a quarter of these women will develop the aggressive HER2-positive breast cancer, which is caused by a genetic mutation that produces an excess of the cancer-promoting protein, the human epidermal growth factor receptor 2 (HER2).

Daki’s medical aid refused to pay for the prescribed treatment Herceptin, which is a drug formulated to treat HER2 cancer, due to the drug’s high cost.

A 12-month course of Herceptin costs about R500 000 in the private sector. Pharmaceutical company Roche, which holds a patent on Herceptin until 2033, offers the drug at a discounted rate of R200, 000 per year per patient to the public sector.

A recent UK study conducted about 260 breast cancer patients found a combination of Herceptin and the cancer drug lapatinib was able to shrink and even destroy cancer tumours among almost 30 percent of women.

Daki did not receive Herceptin and in December was told that the cancer had spread to her spine.

“I strongly believe that none of this [further spread of the cancer] would have happened if I got this treatment,” Daki says. “If I get this treatment, I can live longer and see my two sons grow up.”

When Eastern Cape lawyer and Her2 cancer patient Babalwa Malgas was  also denied treatment by her medical due to  high drug costs, she did what any good lawyer would do: She started doing her own research.

“It also means that we don’t have equal access to health in the Eastern Cape,” said Malgas, who is now in remission but most go for regular screenings to make sure the cancer has not returned. “I had to struggle…with the legal cost of dealing with my medical aid first and the cost of trying to save my life.”

Roche’s South African patents on Herceptin in South Africa expire at least 10 years later than its US and UK patents, according to Medicins Sans Frontières researcher Catherine Tomlinson.

Proposed amendments to South Africa’s patent laws could help bring patents here more in line with those given out internationally and put drugs in the hands of patients like Daki and Malgas.

“(The drugs) cost so much that as a single parent there was not way I was going to bankrupt my family to get the drugs,” said Pinkney-Atkinson, who now works for South Africa’s NCD Alliance.

Her inability to access the more expensive medication she needed has also meant that cheaper alternatives have wracked her immune system, leaving it vulnerable to a range of illnesses over the years. It also means that she is too weak to take the medication that could help manage her chronic pain.

Now in her 60s, Pinkney-Atkinson knows her condition will only get worse.

“I’ve had so many near death experiences and I’ve lived in pain and agony for the last 30 years,” she told Health-e News. “I’m very calm about dying.”

Pinkney-Atkinson described how she came to make peace with the finality of her diagnosis.

“I realise that now I have to use the rest of my life to make things different,” she said. “That’s how I made peace with it. I thought, ‘I survived for a reason,’” she said. – Health-e News.