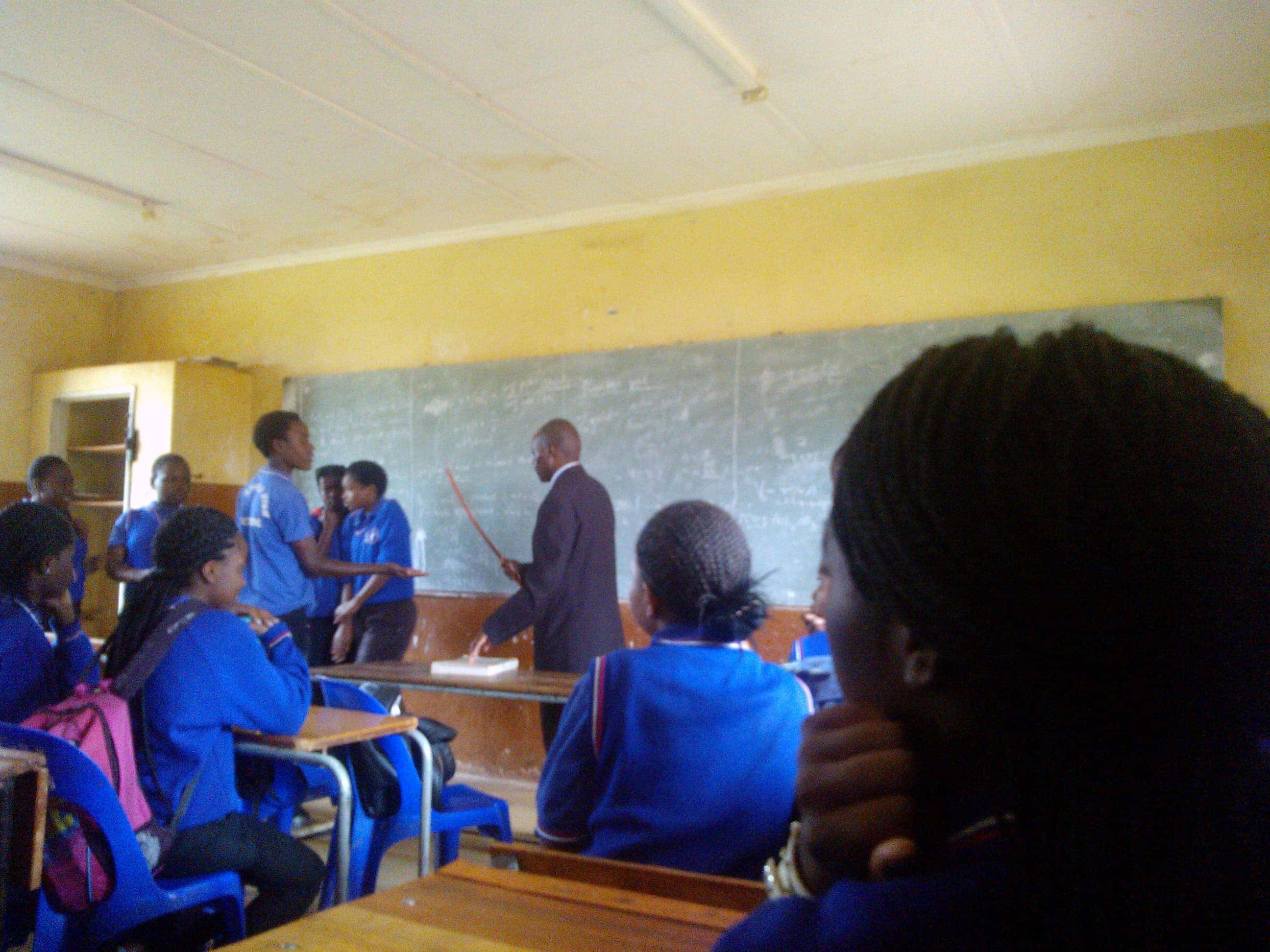 Ongoing allegations of brutal corporal punishment happening regularly at a Limpopo high school are to be addressed this week after a disgruntled pupil took pictures of a teacher beating pupils with a piece of piping.

For several weeks there have been regular complaints of incidents of corporal punishment at Mphaphuli High School in Sibasa, Limpopo. The school is a non-fee paying school and is one of the largest in the Vhembe area, with an average of 1000 new enrolments every year.

Some teachers have claimed that there is maladministration and mismanagement taking place at the school, but that nothing has been done despite their efforts to alert the circuit manager and the district officials.

This week a picture of a teacher raising a pipe, about to strike pupils was taken by one of the pupils on a cellphone. The image has since been shared, and has prompted a meeting between Limpopo Education Department officials, the school governing body and members of COSAS (Congress of South African Students) this Friday. A decision would also be made on what action should be taken with regard to the photographed teacher.

Limpopo Education Department spokesperson Dr Naledzani Rasila said the department was aware of various allegations made against the school, and said the matter was to be investigated.

“We are concerned that corporal punishment is still being practiced in schools around the country. It’s not only in Limpopo. The South African Council of Educators (SACE) does a lot of work to remind teachers about their legal duties and responsibilities as far as corporal punishment is concerned,” said the spokesperson for Basic Education, Elijah Mhlanga.

SACE is the entity established to uphold professional standards and to discipline teachers found to have contravened the law. It is an oversight body.

But pupils at Mphaphuli High claim that some teachers are still regularly using corporal punishment.

“We are being beaten for not tucking in our golf shirts, which I feel is not fair because sometimes we forget to tuck in when we are in a hurry to get to school. We are also being beaten daily for arriving few minutes late at the school,” said one pupil.

We are being beaten for not tucking in our golf shirts, which I feel is not fair because sometimes we forget to tuck in when we are in a hurry to get to school. We are also being beaten daily for arriving few minutes late at the school.

Others claimed they were beaten for wearing colourful belts that were not part of the school uniform.

“This whole situation is so painful to us as girls because we are being beaten on our backs and buttocks for having colourful hairstyles,” said a grade 11 female pupil at the school.

“A learner was nearly knocked by a passing taxi as they were locked outside of the school gates waiting to be beaten for being late last year. Here the only communication which is being used is a sjambok,” said a teacher at the school who wished to remain anonymous out of fear of being victimised.

“There is also no Learners Representative Committee at the school for learners who have grievances. If you try to voice your concerns on behalf of the pupils, you end up being victimised,” said the teacher.

Plastic plumbing pipes, electric pipes and sticks are some of the objects which are being used for beating learners on their backs, buttocks and palms of their hands every day.

Efforts to get comments from the school principal failed. – Health-e News

An edited version of this story was also published in The Star.