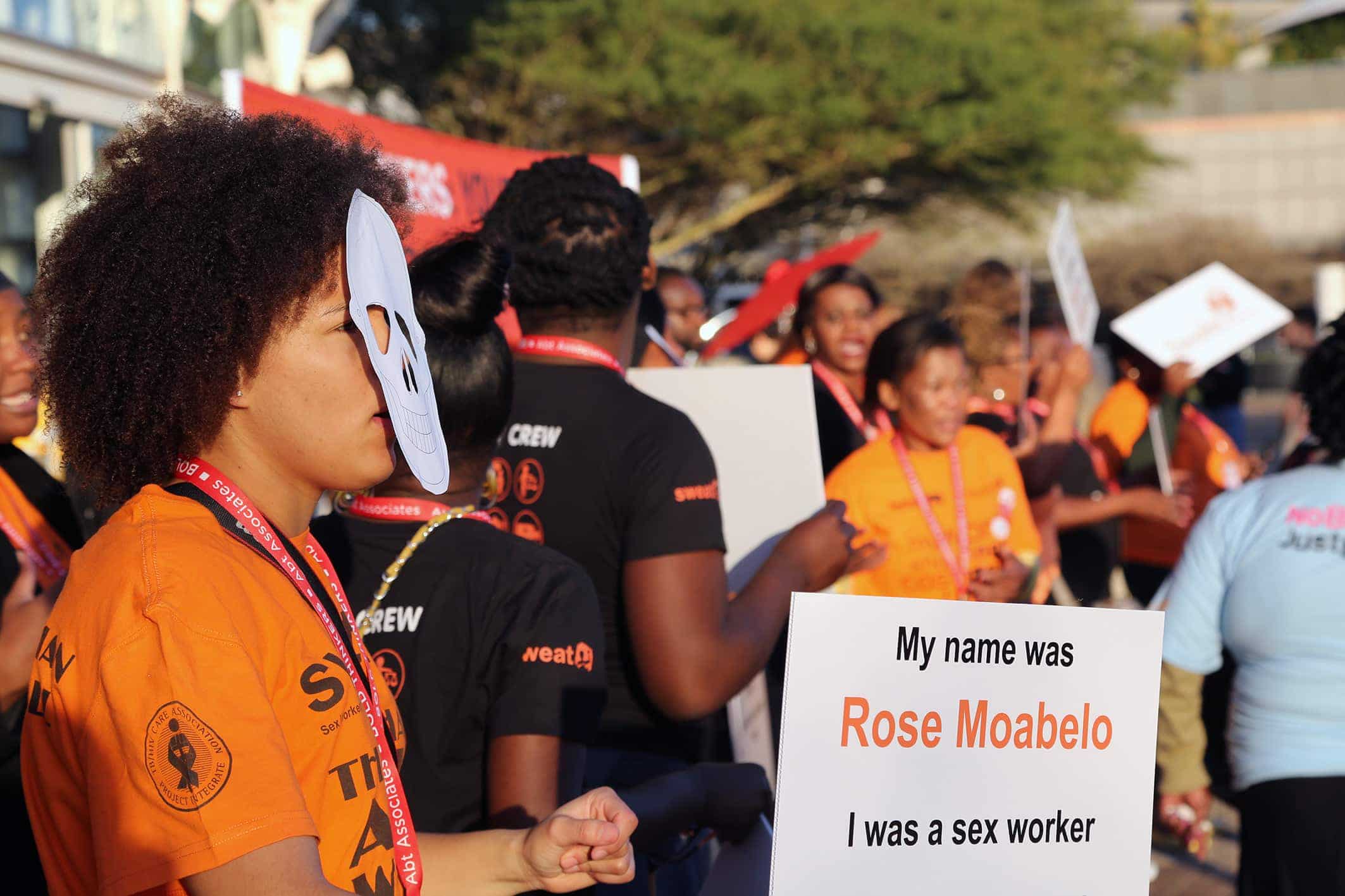 Sex workers find a way past the everyday violence and abuse they experience at the hands of law enforcement – by becoming activists. 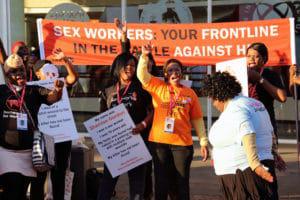 Activists for sex workers protesting outside the venue of the morning of the conference before it kicked off.
Photo©International AIDS Society/Abhi Indrarajan

“I come from a very poor Muslim community in Karnataka in India,” said Sakina Sayed, as she sat down cross-legged on the rough carpet and moved a panel of her pale brown sari out of her path.

Sayed has been a sex worker for the past 11 years because of the frequent abuse and low pay she experienced as a domestic worker for a wealthy family.

“In 2007 my partner at the time, who didn’t know about my work, came to find out I was a sex worker when members in the community told him.”

She rested her head lightly on her hand as she spoke: “One night they came to my house and burned it down.” Her eyes flashed in anger. “I lost everything I had worked so hard for – the house I bought with my own money and every other little thing I owned.

“I went to the police for help but they turned around and said to me ‘What the community has done to you is right, you are a bad woman, a whore’.”

The memory broke her calm as tears sprung to her eyes.  She wiped them away briskly and said: “But that was not enough. A group of teen boys in the neighbourhood came to me at night and forced me out of the house where I was staying into the street where they abused me and asked when my younger sisters would come out.”

Sayed is part of an organisation of sex workers in her area which advocates for the rights of women to be free from police harassment and for access to HIV and other health services, called Uttar Karnataka MahilaOtkuta (UKMO).

Speaking to Health-e at the 21st International Aids Conference, Sayed said UKMO meets monthly with district officials to discuss the work they do in HIV prevention but also to raise unsafe conditions around police brutality.

Since she has become an activist, she has experienced much less brutality – protected by the UKMO collective. “We try help all the sex workers here but some who are mobile and not in the collective are still picked up, beaten, imprisoned and degraded,” she said, clicking her finger knuckles in anger.

Although from a different background, culture and country, Nosipho Vidima’s experiences as a sex worker in Durban are similarly tainted with violence and discrimination.

Sitting at the Aids Conference’s vibrant Global Village, she said that she chose sex work because she could not support herself and her child on her income as a waitress.

“I used to walk past the girls in Morningside doing sex work and thought how clean they look and I could smell their beautiful perfume. I thought these women are affording life while I bust tables. I wanted to be independent,” the young woman said.

Vidima is a human rights and lobbying officer for the Sex Workers Education and Advocacy Taskforce (SWEAT). “I’ve been arrested so many times I can’t count. I remember the very first time: I could not sleep that night because of the smell and the dirty blanket – I worried if I touched it I would get an allergic reaction.”

Vidima said, although sex work is illegal in South Africa, police need to catch someone “in the act”.

“So they usually arrest us on grounds of disturbing the public or for loitering. They like to arrest us on a Friday and keep us locked up for the whole weekend – which is our busiest time so we end up losing income,” she said.

According to Vidima, sex workers often don’t even get the chance to appear in court because the judges “have actual criminals to see and don’t have time to deal with these ridiculous cases”. They are often forced by police officers to sweep cells and clean toilets while detained.

“The violence is everywhere. I have been raped, pepper sprayed, assaulted and verbally abused by police,” she said.

Vidima is studying law, paid for by her job as a sex worker, but worries about whether her criminal record will stop her from being admitted to the Bar when she graduates.

Since starting advocacy work at SWEAT in 2010, Vidima said she has been able to save herself from some violent situations – with her wit and by knowing her rights. “A few months ago, a police officer approached me while I was working and when he accused me of soliciting I jingled my car keys at him and walked in the direction of my car.”

She said the police officer left her alone, after scolding her “for being on these dangerous streets with all the prostitutes”.

“Inside I was thinking ‘You’re talking to one Mr.’. People have such a stereotypical idea of sex workers that they can’t imagine one who owns a car,” she said.

Vidima hopes the government will consider decriminalising the industry soon because “all the evidence shows it is the intelligent decision”. “The research is backed by health experts, human rights experts and the larger movement of feminism.”

She looks forward to a day when sex workers are protected by labour laws like all other workers in the country.

“Brothels and other places of work could be regulated, we could have policies in place to enforce condom use with our clients – protecting ourselves from HIV. We could have a say in not working when we’re on our menstrual periods. Being able to get justice when we are raped and abused. These things could change our lives.”

For Sayed, telling her story is another way of advocating for things to change in her home country and the world. “These stories are the reason why we demand decriminalisation. We want to ensure that no sex worker faces the stories we have in our lives.”

She brushed a strand of dark hair out of her face and tucked it behind an ear decorated with small gold hoops. “Today the joy of my life is those very same boys who burnt down my house and abused me in the street now come to me for help. I make sure to always give them some money because I am earning enough money to do so. That is my personal victory over them.” – Health-e News.