A young man who grew up poor in rural Limpopo has, by age 28, trained as a nurse, become a motivational speaker, joined a care group that has adopted 120 orphans and spearheaded mass donations of shoes to six rural schools. 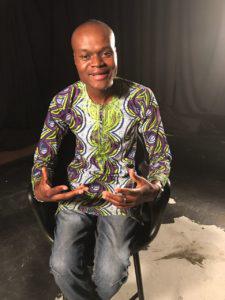 And now, determined to achieve even more, Phumudzo Norman Themeli is striving to encourage other young people to stay away from drugs and alcohol in a book he has written titled “A confused child in the darkness”.

The challenges he faced growing up inspired Themeli, now a practicing nurse and motivational speaker, to do whatever possible to change the plight of others who come from the same dark situation.

In his book Themeli talks about how he grew up in the deep rural village of Tshikambe, outside of Sibasa in Limpopo. There he experienced first-hand poverty and the temptations to use drugs to escape his poor family background, and growing up without a father.

“Growing up poor does not define one’s future, but education does. I never let my poor background determine my future, and what I wanted to achieve while growing up. Had I allowed my background to define who I am, I would not be where I am right now,” said Themeli.

Currently Themeli is employed as a nurse at Steve Biko Hospital in Gauteng, but in his free time he works as a motivational speaker, advising youth on the problem issues they face every day.

“As a country we are faced with a huge challenge when it comes to teenage pregnancies. It pains me when I see young girls falling pregnant and quitting school. I feel like more still needs to be done to educate young girls about the dangers of engaging themselves in unprotected sexual intercourse,” he said.

And so he has written a book that speaks to the youth about ways to make wise decisions and overcome peer-pressure.

Together with his friends, Themeli has adopted 120 orphans. He takes care of the children by making sure that they go to school with clean and proper uniforms.

“The youth of today are faced with many challenges, including drugs, alcohol and HIV. If we do not stand up and show them a way forward our country will suffer. If you look at how the youth are abusing nyaope it shows us that more still needs to be done to discourage them from taking that path. More emphasis needs to be put on education,” he said.

In 2013 Themeli was admitted to hospital with serious lung failure. During that time he realised that, if he wants to make a difference, he needs to invest more time in motivating young people to make wise decisions in life.

The official launch of his book “A confused child in the darkness” will take place on June 10.

An edited copy of this story appeared in The Star.