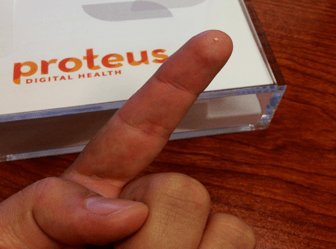 Imagine all it requires is a micro-chip the size of a few grains of sand, a skin patch and a Bluetooth-enabled cell-phone?

Well preliminary research announced at the Union World Conference on Lung Health being held in Mexico this week, this could soon be a reality.

The easy-to-use United States Federal Drug Authority-approved technology works by inserting a micro-chip into the anti-TB drugs that is able to measure the levels of the drug in a person’s system in near real-time allowing health workers paperless access to their patient’s drug-taking behaviour. The chip is the size of a few grains of sand and is easily inserted into any medication.

A small skin path on the patient’s torso transmits the chip’s data to internet-based servers where both patients and clinicians can see when and how much medication a patient has taken – or has not.

It is a tool that is greatly needed because TB is notoriously difficult to monitor for treatment adherence. The current “gold standard”, and the method recommended by the World Health Organisation, is called directly observed therapy (DOT). This is when a health worker observes a patient taking their medication every day which often is a great inconvenience to patients who have to travel to health facilities daily for months.

In the United States health workers drive to you, your home or your workplace for DOT and it still does not work well.

“In the United States health workers drive to you, your home or your workplace for DOT and it still does not work well,” Dr Sara Browne, lead researcher for the study, told Health-e News.

They wanted to know if this technology had the potential to improve adherence rates – which are often dismally low. But they first had to establish that the technology actually detected the medication accurately and if it confirmed more doses than DOT.

The study found that the detection accuracy was close to 100 percent and that the method confirmed 54 percent more doses that DOT because all doses were electronically recorded while DOT confirmations often don’t happen over weekends or on public holidays and are documented manually.

Browne said that patients often find it difficult to adhere to long treatment regimes that often come with side effects.

Ordinary TB takes six months of treatment with multiple medicines and drug-resistant TB can take over two years to treat with toxic drugs. But if patients don’t take their medication as prescribed they risk developing drug-resistance or further drug-resistance – limiting their treatment options significantly and increasing their chances of death.

The new technology named WOT (wirelessly observed therapy) “has the potential to revolutionise TB care” because a health worker can quickly, easily and conveniently access a spreadsheet that clearly indicates when a patient is not adhering to their medication.

“A nurse can then for example call the patient and ask why they haven’t taken their medication that day,” said Browne.

If the second phase of our trial is successful and we can access the technology affordably this could truly be transformative for TB control.

The results are preliminary and need to be confirmed in other settings. South Africa is being considered as one of the settings for the next phase of the trial.

“We need to know how this technology works in low and middle income countries and adapt it to different contexts,” said Browne.

Although the cost of the technology is currently not known, as the company who produces is has donated it for research purposes, Browne said it is not expected to be expensive. She said there is an economic analysis currently underway to find out at what cost the technology will be feasible to low and middle income countries.

According to Browne, and others, DOT is “resource-intensive, inconvenient, intrusive, difficult to administer” and is simply “unfeasible”.

According to Dr Yogan Pillay, from the South African Department of Health, although DOT is an official policy “it is not monitored carefully”. “Many people find DOT disempowering,” he said.

Browne said often nurses dispense medication without watching a patient take it – an obstacle that wouldn’t exist with WOT. She said more results are likely to be presented early next year.

“If the second phase of our trial is successful and we can access the technology affordably this could truly be transformative for TB control.”