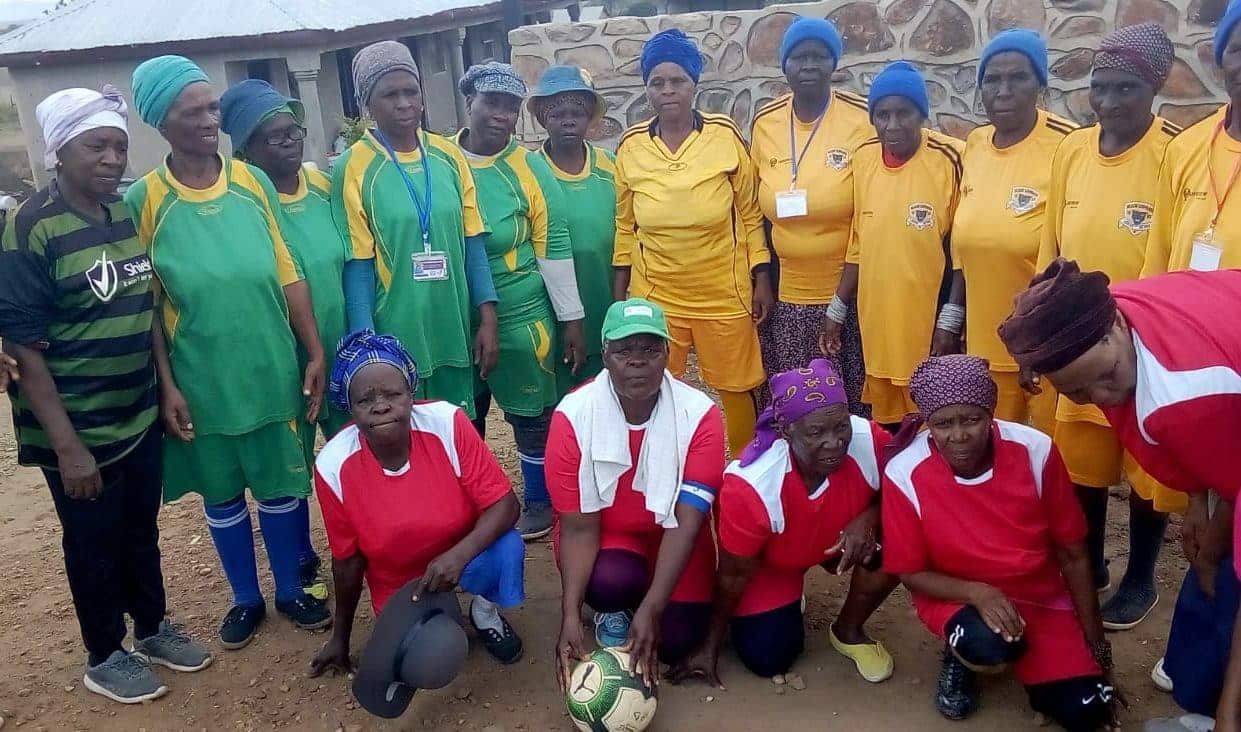 Gogos in Mpheni Village say they suffer from sore joints and chronic illnesses because they don’t get enough exercise or do enough hobbies. But days of sitting at home drinking traditional beer are over after football for the elderly in the village was launched.

The pensioners have praised the initiative, saying it has given them something to do and it keeps them healthy and fit.

Mpheni resident Selina Sadiki, 69, said she finds the exercise relaxing because it allows her to forget about her problems. “I feel like a new person. It keeps me busy, healthy and happy.”

She said the exercise has also cut down her visits to the clinic. “I used to visit the local clinic very often but now I only go once a month to collect my medicine.” Although she is happy playing football, Sadiki feels that more still needs to be done to empower elderly people.

“We only play football twice a week which is not enough. On days we don’t exercise we get bored and sometimes end up drinking traditional beer again, though we know that it is not good for our health and wellbeing,” she said.

A popular form of exercise

Playing football for elderly residents, especially women, has become a popular form of exercise in most villages within the Vhembe district and teams host tournaments and play against each other.

Grace Makushu, 52, plays football to lose weight and become healthy. “I am on the right path to having a healthy body which will be ready to fight against old age diseases,” she said

Meanwhile about an hour away from Mpheni Village, Mercy Old Age Home Community Project has been established to tackle alcohol abuse by the elderly. According to project manager Jack Moseamedi, many of the elderly residents of Topanama Village outside Tzaneen indulge excessively in alcohol because they have nothing to keep them busy.

“There are no activities around for old people and there is no project in the community that caters for them, which is why we established this one,” said Moseamedi.

The project, which was launched in December, seeks to protect the elderly by educating them about their roles, rights and responsibilities and also by providing them with meaningful and productive activities.

One of the members, 78-year-old Rosina Ramaila, said she appreciated the initiative and believed it would help pensioners deal with daily stress and give them something worth waking up for.

“This project is not only going to assist the elderly, but it will also assist the youth. The elderly have a fountain of wisdom about the indigenous ways of doing things, which they can pass on to the younger generation,” he said.

One of the members, 78-year-old Rosina Ramaila, said she appreciated the initiative and believed it would help pensioners deal with daily stress and give them something worth waking up for.

“It will keep us busy and we won’t be sitting at home and stressed. We will be keeping each other company and reminiscing about old times,” said Ramaila.