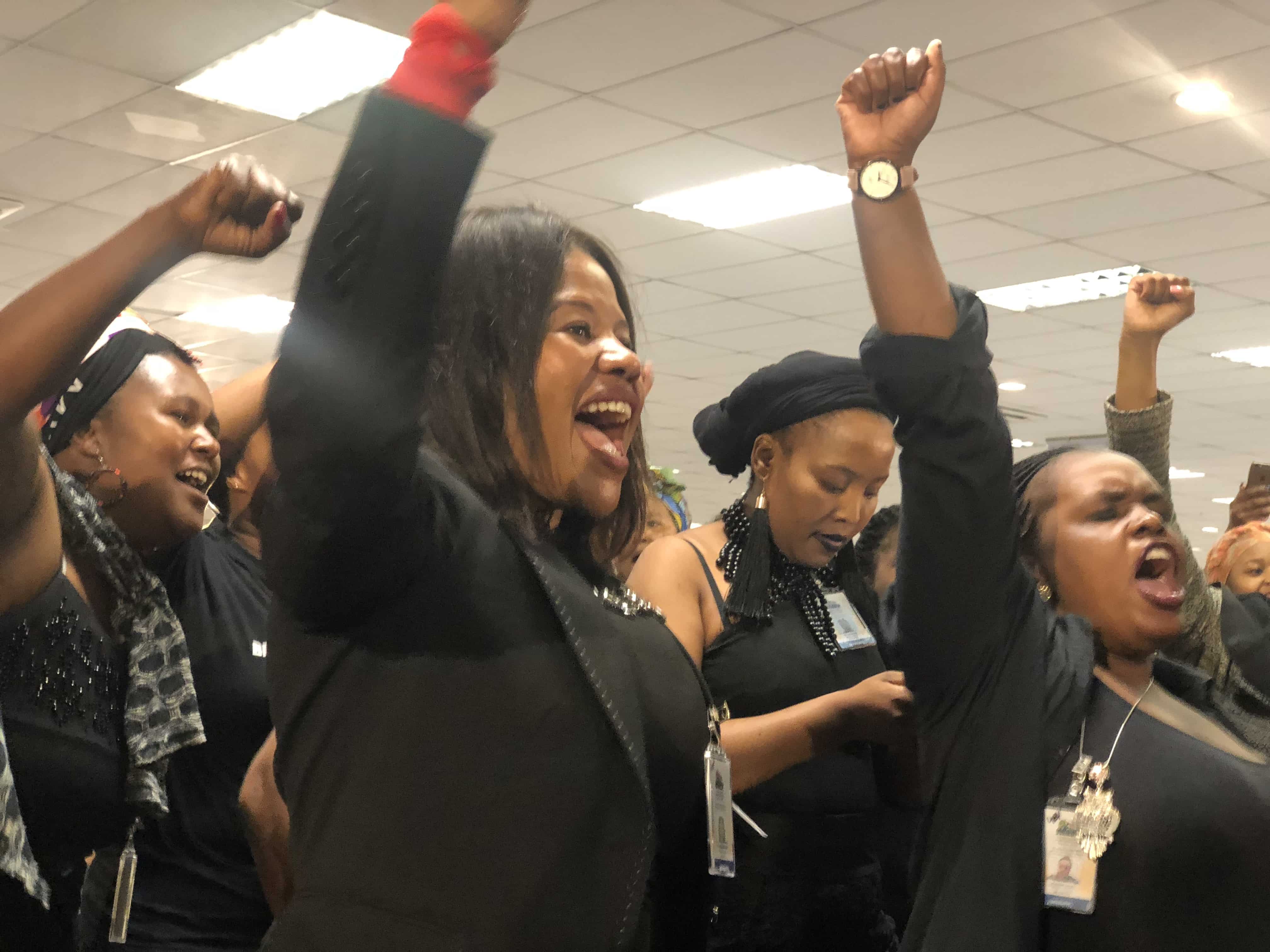 As the country heads to the polls, young women and gender non-conforming people feel failed by the governing party and have little hope in its rivals.

“All these parties are playing the blame game. They’re simply using women and activists to further their individual and collective political careers. They don’t care about us,” Esther Meletse said.

Meletse was one of the women and gender non-conforming people attending the Soul City Institute for Social Justice’s town hall meeting on Monday afternoon. She is part of the Shayisfuba campaign collective that is demanding a feminist-leaning government ahead of the elections.

With about a week left before South Africans cast their votes, young women and gender non-conforming people questioned the country’s four largest parties on how they will tackle some of the pressing issues facing them, including access to abortion and family planning, gender-based violence and sex work. The event brought together representatives from the Inkatha Freedom Party, African National Congress, Economic Freedom Fighters and Democratic Alliance.

According to the Electoral Commission of South Africa, women represent 55% of the registered voters in the upcoming elections.

All representatives argued that ending gender-based violence is a priority for their respective parties. However the ANC, EFF, DA have faced public scrutiny on how the parties have dealt with sexual harassment and violence within their ranks. IFP is the only party that argued that the party is “clean” of any sexual harassment because its members and leaders respect women, according to party representative Dalsy Manganyi.

None of the party’s members of parliament, members of provincial legislature or national executive members have been implicated in sexual harassment cases, IFP Member of Parliament Liezl van der Merwe told Health-e. Van der Merwe said she would have to check if any complaints have been made on local government level.

But the party’s assertions about no sexual harassment within their ranks left attendees doubtful of its veracity. “I find it hard to believe that in a country as violent as ours that you [Dalsy] can confidently say there’s no sexual harassment in your party,” said KayaFM host Kgomotso Matsunyane.

Attendees felt that the parties didn’t adequately share how they plan on achieving their manifesto commitments.

Meletse said: “I wanted to hear how these parties are practically making South Africa a safer and better place for young black women to live in. We didn’t hear solutions but parties were just defending themselves.”

While the event gave space to young women to voice their questions and concerns, the answers from the political parties were not great,  said Sexual and Reproductive Justice Coalition Director Marion Stevens. “The anger and frustration in the room was palpable. Parties need to work on being very specific about language, implementation and budgets.”

Activists felt that gender issues remain to be an afterthought for political parties and urged representatives to prioritise some the issues plaguing South African women and gender non-conforming people.

“Women’s issues cannot be postponed any longer,” Soul City CEO Lebogang Ramafoko said. “I’m disappointed that the ANC, DA and IFP despite the many years they’ve governed are unable to show us the work that they have done.” – Health-e News

An edited version of this story was also published in The Citizen.