The Treatment Action Campaign (TAC) has received a R14 million pledge from Canadian non-profit organisation the Stephen Lewis Foundation that will save it from closing its doors, but will not save jobs already on the cutting board. 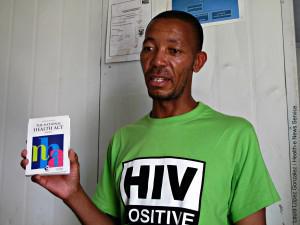 The Treatment Action Campaign currently holds meetings to educate local communities not just about HIV, but also about their Constitutional right to health. Staff allege new streamlining plans will cut organisation where it is needed most – in the provinces.

The foundation, headed by former UN Special Envoy for HIV/AIDS in Africa Stephen Lewis, made the announcement at a Toronto press conference late on Friday attended by former TAC General Secretary Vuyiseka Dubula.

The foundation has challenged other South African and international donors to support the organisation that fought to introduce HIV treatment in South Africa. The foundation will also match up to R14m in contributions for TAC’s budget.

Lewis once called TAC the “spiritual leader” of HIV activism. On Friday, he described how TAC became a “model in the Herculean struggle against the pandemic.”

His daughter, Ilana Landsberg-Lewis, is the executive director of the foundation that bears her father’s name. She said that as consecutive UNAIDS reports and international donors alike waxed on about the so-called “end of AIDS”, this was when the world needs the TAC.

“We’ve seen for several years the really lamentable and worrisome retraction of funds and the diminution of funds for community-based organisations and (non-governmental organsations) and importantly and disturbingly, the activists’ networks,” Landsberg-Lewis told Health-e News. “(TAC) was responsible for rescuing millions of lives and for turning around prevailing norms and attitudes, and we all know that things would have been much worse without them.”

“Right at the moment when another chapter is unfolding… (with) the intonation that the end of the pandemic is in sight…seems to me is the most ludicrous moment to let your strongest organisations run by and for the people affected to fail,” she added.

TAC General Secretary Anele Yawa has thanked the foundation, which has financially supported TAC since 2006, and appealed for donors to heed Lewis’ call.

“Our struggle against AIDS, tuberculosis (TB) and collapsing healthcare services in South Africa is far from over,” said Yawa. “We appeal to donors out there to match this pledge so that we can turn all our attention to the real and urgent work ahead of us.”

Some TAC staff told last day will be 15 December

TAC has already begun to retrench staff and cut back infrastructure to make the organisation more financially sustainable in the future. According to the Stephen Lewis Foundation, TAC will start closing down unless it receives at least R28 million in new funding by March next year.

In August, some TAC employees had already been told about looming layoffs as the organisation slashes provincial staff and moves them out of dedicated offices, according to staff members who asked to remain anonymous.

Despite TAC employees claiming that they had been told to re-apply for remaining posts, TAC stopped short of confirming the downsizing in late October.

[quote float= right]Without us, people will die in their separate corners along because no one will speak for them”

“After intense reflection over the last 12 months, and given the withdrawal of some large donors, it is clear though that we have to become more focused and streamlined,” said TAC in response to questions over the alleged layoffs.

“TAC’s national leadership is currently consulting with its staff and various levels of elected leadership about how to ensure an effective and sustainable TAC going forward,” it added. “No final decisions have as yet been taken about the organisation’s future structure. Such decisions will only be taken after consultations are completed and a proposal is made to the TAC board of directors.”

TAC provincial staff said that they had already been told their jobs would be cut in October and that their last working day would be 15 December.

Provincial operations are to be scaled down to two or three provincial organisers working from home or from the offices of other organisations. TAC staff added that they had been told that they could re-apply for these positions but that many employees won’t qualify for new positions.

“They want people who are skilled,” said one staff member who asked to remain anonymous. “For example, for a district organiser they want someone with diplomas in project management and communications and that’s the lowest position.

“TAC was never about skills, it was about the experience of people working in community mobilisation,” he said.

He added that some provincial staff members were willing to take smaller salaries in the hopes that more people could be employed.

“We said rather than employ a few people, we’d rather have a lot of people sharing that money but they said that would too much – that management, it’s burdensome,” he told Health-e News. “They said people must volunteer. How do you want some people to work for free while people at the national office are earning so much?”

A smaller TAC to keep up the fight

He said that the move to restructure has sparked fears among some of the organisation’s more than 8,000 members.

The staff member said the provincial offices usually follow up with medicine depots to on reported drug stock outs or health facility managers when patients report poor treatment: “Without us, people will die in their separate corners along because no one will speak for them.”

However in response to questions regarding TAC’s downsizing, Yawa stressed that even in a more streamlined form, TAC will continue with campaigns such as medicine stock outs, silicosis among miners, and mismanagement within the public healthcare system.”

“TAC will continue with its mandate of serving the interests of the mostly poor users of the public healthcare system in South Africa,” he said “As TAC, we are not taking this as a setback, but as a stepping stone in the history of our struggle of saving lives and ensuring that those who are in need of treatment for HIV, TB, or any other disease are able to get that treatment.”

“As a membership-based organisation, it is important for us to consult at length with all our branches before we can do anything and that is what the leadership is currently doing,” he added. – Health-e News.