HIV treatment was introduced after a huge struggle, but this week South Africa celebrated a decade of free antiretroviral (ARV) treatment. 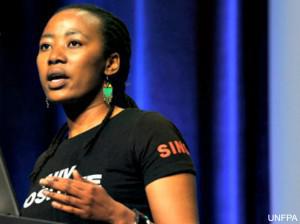 HIV treatment was introduced after a huge struggle, but this week South Africa celebrated a decade of free antiretroviral (ARV) treatment.

South Africa introduced free ARVs in the public sector in April 2004 after a lengthy battle between activists and former President Thabo Mbeki and Health Minister Dr Manto Tshabalala-Msimang, who questioned the link between HIV and AIDS, and ARVs’ effectiveness.

However, today South Africa has the biggest treatment programme in the world. Some 2.4 million people have received the life-saving treatment leading to increases in life expectancy and record low levels of mother-to-child HIV transmission rates.

The country has also become a global leader in HIV research.

On the ten-year anniversary, activists look back at the fight for treatment and caution that the struggle is now focused on ensuring that the heath system functions properly.

Born in the former Transkei, Vuyiseka Dubula was diagnosed with HIV in 2001 at the age of 22 and joined the Treatment Action Campaign (TAC) where she would rise through the ranks to become general secretary.

Government predicts that 4.6 million people will have started ARVs within two years. But Dubula remembers when it was impossible to imagine ARVs in public health when AIDS denialism was at its height and more than 200 TAC members had died.

“There was a moment among some of us… in which we felt we were never going to win,” says Dubula, who recently stepped down as TAC general secretary to join the gender organisation Sonke Gender Justice. “There was a sense, especially for those of us living with HIV, that we might not be the ones that benefited from the struggle and that we were perhaps really doing this for the next generation.”

The organisation had also began fundraising to buy medicines with the help of sympathetic doctors like Dr Francois Venter who could prescribe them.

Meanwhile, government officials were accessing treatment while thousands died, says Venter who is now the deputy executive director at the Wits Institute for Sexual and Reproductive Health, HIV and Related Diseases.

“We were treating Cabinet members or their family members and we would ask them, ‘how can you let this continue when you are getting life-saving drugs and you can see it works?’”

But when sentiment began to shift, change came fast, he adds.

“The back story was that there were almost these secret meetings where brave members of the Department of Health didn’t so much go behind the health minister’s back but did things that were on the fringes of being acceptable,” Venter tells Health-e.

He remembers a 2002 meeting at the Birchwood Hotel outside Johannesburg where he, other clinicians, economists and Department of Health staff met with US government representatives who urged the group to put together the best ARV regimen possible without thinking about costs.

Two years later, the county’s first HIV treatment regimens were largely those discussed at that meeting, Venter says. Funding from the US President’s Emergency Plan for AIDS Relief (PEPFAR) then became instrumental in helping South Africa scale up treatment.

With ARVs’ introduction, Venter says he saw patients come back from the brink of death and patients in his hospital stopped dying “hand over fist.”

For Dubula, the victory meant she could live a normal life – marry an HIV-negative man and give birth to two HIV-negative children .

But the fight also changed her: “It provided me with a space for political engagement,” Dubula says. “Through HIV and health, I began to understand society and how as an individual I could challenge what was happening around me. It took me out of my misery and a sense of victimhood…I felt like a citizen.”

“As a young woman in South Africa, if I had that opportunity at an earlier age, I think that I wouldn’t have contracted HIV in the first place,” says Dubula who is currently pursing a doctoral degree. “I would have been more empowered to negotiate safe sex.”

The next challenge: Fixing the health system

In the next decade, South Africa will have to increase HIV testing and treatment among men, adolescents and hard to reach populations like sex workers to keep charting gains against HIV, according to Venter.

Dubula says more should also be done to use ARVs to prevent transmission among discordant couples. She advocates extending ARVs to prevent HIV infection to high-risk populations like sex workers and

However, both Venter and Dubula agree that the major threat to the country’s fight against HIV is what Venter describes as a “health system that has disintegrated.”

“We’re seeing drug stock-outs across the country,” Venter says. “To me, it suggests that there is a health care system failure.”

According to Venter, a case in point is the failure of provinces to pay the National Health Laboratory System (NHLS) millions of rands.

“The fact that the NHLS hasn’t been paid is shocking and means that 80 percent of patients in the country are at risk of failures in routine monitoring,”  Venter tells Health-e. “We have third-line ARVs now…but God help you if you are a diabetic or a cancer patient because you are not going to get your blood tests in time.”