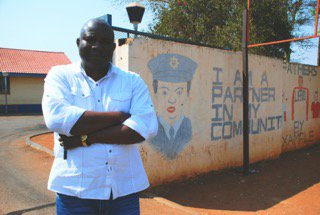 Detective Amos Maneta has only had one failed case in a 31-year career dedicated to putting rapists and murderers behind bars. He tells Health-e News’ UFRIEDA HO why that the extent of violence against women is a national crisis.

Amos Maneta has been to many funerals – funerals of people he didn’t know. The police detective attends crime victims’ funerals less because his paying final respects, more because he knows it’s where people talk. Chatter can hold clues and leads, he says, and it’s how he gets closer to bringing a murderer or a rapist to book – how he hopes to bring closure and justice to grieving families.

Maneta (57) is at the Naledi, Soweto police station on a baking hot Saturday morning. He left the station in 2010 to take up a head office position in fancier offices along Empire Road.

“But this is where it all started, where I learnt to be a good detective,” the police captain says of his time at the station, where he spent most of his 31-year career. 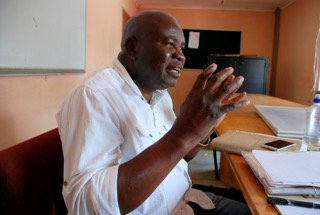 Captain Amos Maneta returns to Naledi Station where office No.37 was where the detective cut his teeth.

The station is close to his heart, even if it aches for attention from a broom and mop. In contrast to the drab police station, Maneta steps out of his immaculately clean BMW with a warm, open smile and ready handshake attached to an imposing frame. He’s casually stylish in crisp white shirt, blue jeans and Nikes.

He greets junior SAPS members in the charge room and they respond with deference as soon as they find out who he is and that Naledi was where he cut his teeth to become one of South Africa’s most respected policemen.

At Naledi, he learned about gaining a community’s trust; about patience and no shortcuts in piecing together evidence for strong court cases. Maneta has only ever had one case fail in court in his career. It’s clear that, as friendly as he is, he doesn’t accept “less-than” when he asks a policewoman to attend to a swarm of flies circling the passage outside the toilets.

While she sprays insecticide, he lays out files on the table neatly – they are of cases he’ll never forget. There’s Thato Radebe, a 14-year-old gang-raped and murdered in February 2007.  Her four attackers crushed her skull and stabbed and raped her with beer bottles.

There’s Nomsa Mabena, beaten to death by a jealous boyfriend in 2004 who dumped her body and told police she had been kidnapped. Her boyfriend, Mlamuli Mnisi, was out on bail for rape when he killed her. He would go on to kill another girlfriend, Bongiwe Ngema, six months later.

There are the Mbele sisters, Lindiwe (15) and Neliswe (12). They were coming home from church in June 2005 when they were last seen alive. Their decomposing bodies were found 12 days later near the Nancefield hostel in Soweto. Both had been raped and strangled. Maneta is preparing this case for prosecution.

Maneta closes his eyes, runs his hand over his face, but he can’t rub away the memories of those moments arriving at the scenes of where these dead girls and women were discovered. They’re scenes of depravity and brutality and senseless loss of life – but they’re also reality.

It makes Maneta unequivocal that rape and violence against women and children is a crisis, not a challenge. The father of three young men says: “I don’t believe in hiding truths. I am not a politician. I am a policeman and I know what is going on in the field – we have a crisis.

“I’m also a human being and I can tell you there are times I think I would not arrest a rapist or a murderer – I would rather sort him out myself because I feel so much anger and sadness.

“But that’s when I pray and remind myself I am a policeman and I must do my job. If you bring emotions to this job, you make mistakes and victims and families can’t afford detectives making mistakes.”

There’s more patience than frustration in his voice though. It’s this constant self-checking, a personal drive that has helped him stay the course and helped earn him accolades like “top cop”, “super-sleuth” and even “hero”. He’s proud of these labels, but he also says that being a detective is a calling. He points out that success is about years of distilling his experience, knowledge and conscientious work ethic.

“It’s the smallnyana things – they have to fit like a puzzle, one piece builds on the next,” he says.

It’s a philosophy he and his wife, who also works for the SAPS, apply to raising their three sons in Soweto, who are now graduates in their 20s. Maneta says raising boys well is a piece in the puzzle to ending violence against women and children.

“When they were growing up, I would say to them that a girl is like your sister. You must protect and respect them. As young men, I tell them that when a woman says no, take that answer,” he says.

Now, after more than 30 years with the police, he’s contemplating early retirement. But he admits he never stops thinking about the unsolved cases – he can’t rest. Maneta raises his hand to his heart when he talks about the dozens of cold cases that mean no answers for families. “My heart is sore; those cases hurts me,” he says. He closes his eyes and the bloody, cruel images crowd his mind again.