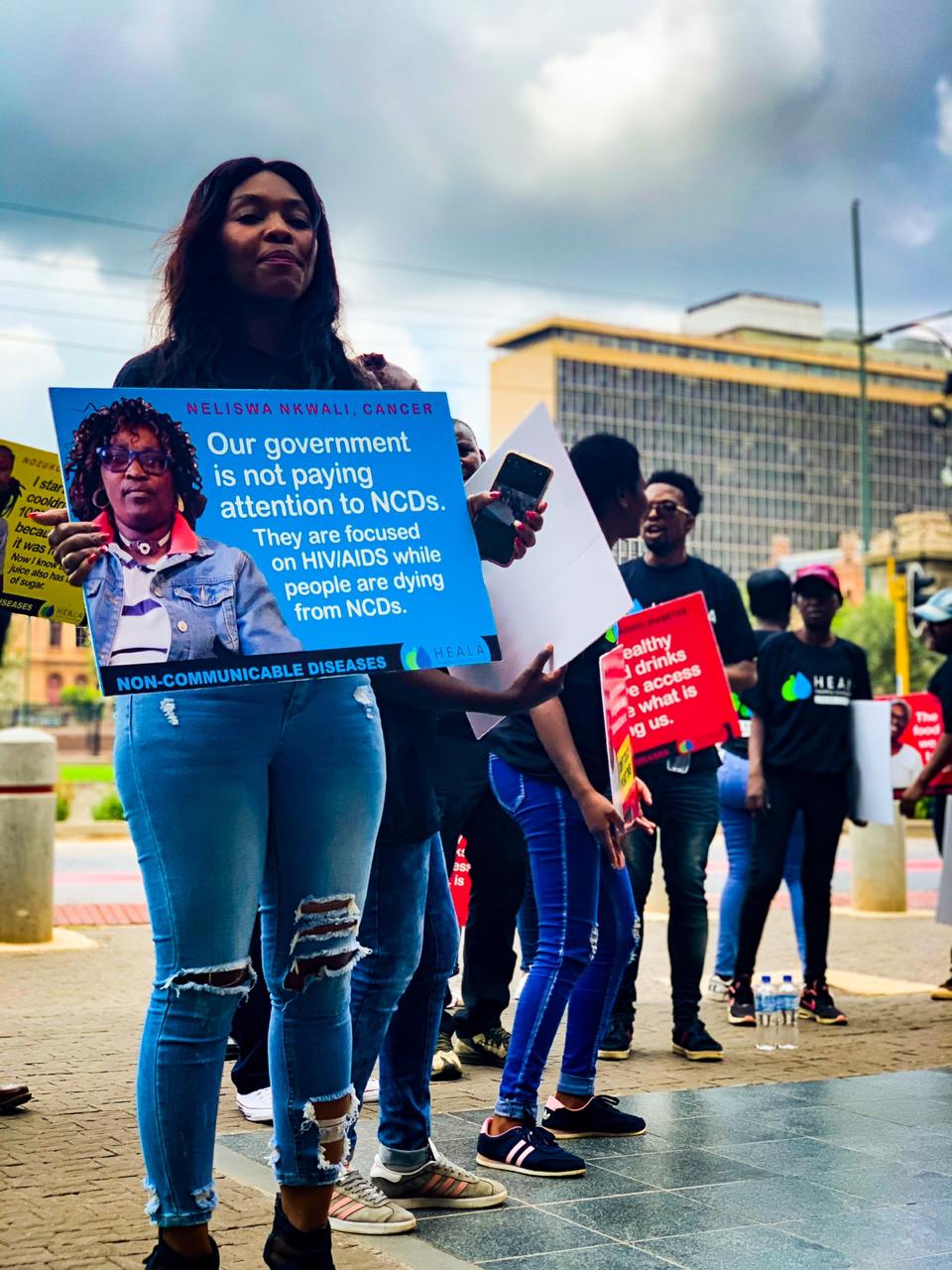 Gathered outside number 40 Church Street in Tshwane, activists and people living with non-communicable diseases (NCDs) have submitted a memorandum to Treasury, calling for an increase on the health promotion levy.

The levy, also known as the sugary drinks tax, is currently 11% and the Healthy Living Alliance (HEALA) is demanding that it be increased by an additional 9% which will put the levy at 20%.

According to the organisation, the increase in the levy by April 1 will assist in reducing the high number of NCDs such as type 2 diabetes, hypertension and stroke, which are currently regarded as a burden to the health system.

Nosipho Msiza (32) was diagnosed with hypertension almost five years ago and is one of the people who support the proposal to increase the levy.

“My cholesterol levels, blood pressure, and blood sugar levels were ridiculously high when I went to the clinic for a screening. And it was a tough wake-up call for [me] especially, because when you come from a family of obese people, you don’t see anything wrong with it.”

She says that the idea of having to be on medication for the rest of her life encouraged her to make a lifestyle change and shed some weight.

“I used to weigh 115kg and I have lost some weight now. I also realised that it is possible to lose weight and be healthy at the same time. I now educate people in my community about eating healthy and the increase in the levy will be good for everyone.”

Msiza also believes that government should increase the promotion of healthy food options and to also ensure that healthy food is affordable.

One step to tackling NCDs

Mandla Magaza, an activist for the Treatment Action Campaign (TAC) Tembisa branch, says that the increase will cement government’s commitment to addressing NCDs.

“For us, it is difficult because during clinic hours, we do health talks and it sometimes becomes a challenge to encourage healthy eating when unhealthy foods such as sugary drinks are not taxed as they should be, and are readily available. The tax increase would make it easy for us to spread the message on healthy eating as we would have government’s full support when it comes to discouraging people from consuming sugary drinks.”

While delivering the memorandum, HEALA informed representatives from Treasury about public support shown in a petition on Amandla.mobi, which received over 11 000 signatures in support of expanding sugary drinks tax to fruit juices.

“We call Minister Tito Mboweni to commit to this in the upcoming Budget Policy Statement. Unlike the VAT hike which we were not consulted on, a sugary drinks tax has public support and means healthier people and more funding for health,” says HEALA programme manager, Lawrence Mbalati.

Treasury Chief of Staff Marlon Geswint received the memorandum on behalf of the minister and gave assurance that he would share the document with relevant role-players.

“There has been previous engagement on this so rest assured that this will be shared with the relevant authorities. As you, we look forward to seeing how the minister is going to respond to it,” he says.

Geswit also commended HEALA on their activism in promoting healthy living. “We must commend you that you are busy with a really good initiative. And we want to wish you everything of the best as you continue to educate the general public and move forward in your cause. So on behalf of the ministry, I accept the memorandum.”

Following a study done by PRICELESS (Priority Cost Effective Lessons for System Strengthening) which found that the HPL resulted in higher prices for sugary drinks, and untaxed healthier beverages like water did not increase in price.

“This is a first indication that the tax could motivate consumers to pick healthier options that are not taxed rather than taxed sugary drinks, which is very encouraging,” adds Mbalati.

The Minister of Finance’s budget speech, which will held at the end February, is expected to yield positive news for HEALA.

“We are happy that somebody from Treasury accepted our memorandum so we are now hoping that they will consider our recommendations and we will be looking at the upcoming budget speech that will be taking place at the end of this month to see if our call of the increase of the sugary drinks tax from 11% to 20% and not only that but to also further include 100% fruit juices has been taken seriously or not,” says Mary-Jane Matsolo, campaign and advocacy coordinator for HEALA.

Matsolo adds that they also hope to see government not giving in to pressure from unhealthy food and beverage manufacturers, but to put the health of South Africans into consideration especially when it comes to fighting to reduce the burden the health system faces because of the rising numbers of people who need treatment for NCDs. – Health-e News