Home » #STICondomWeek: ‘Give women the power to protect themselves’ 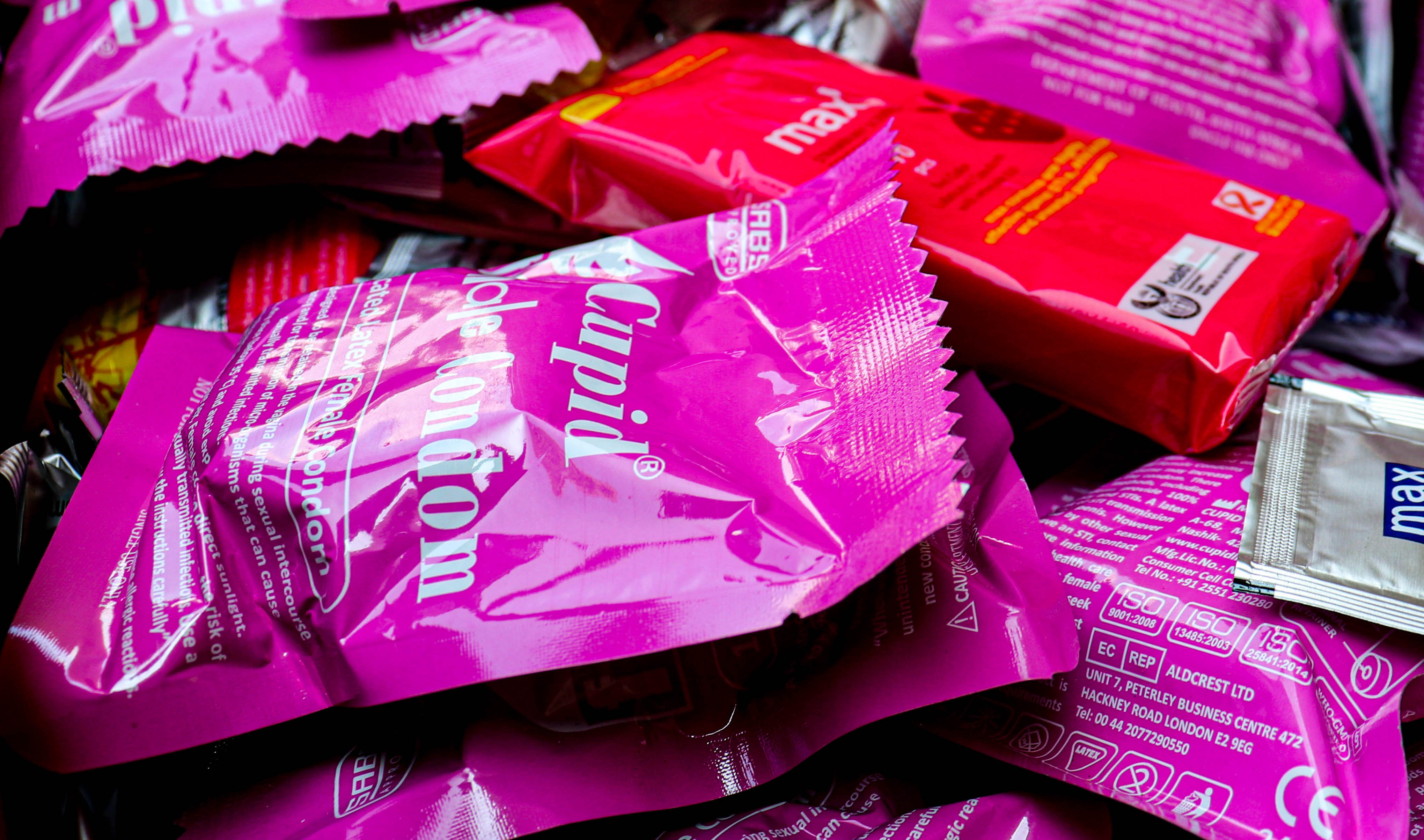 Most of the country’s attention is focussed on condom use to prevent HIV, but other sexually transmitted infections (STIs) remain a serious problem — and can exacerbate risk of HIV infection.

Condom use is one of the few proven ways to prevent or lessen the risk of contracting a range of sexually transmitted infections — or unwanted pregnancies. However, in a world where more than one-million people are estimated to contract an STI every day, South Africans are lagging behind on condom awareness and usage.

“Generally, in South Africa we have a problem when it comes to prevention of STIs, the condom usage has decreased, we have dropped condom use to about 38%,” Steve Letsike of South African National Aids Council tells OurHealth. This is according to the Human Sciences Research Council (HSRC) South African HIV Prevalence, Incidence, Behaviour and Communication Survey. In 2017, the annual survey pegged condom use for people aged 15-24 at 62.6%, those aged 25-49 at 53.3% and people aged 50-64 at 33.3%.

“South African’s behaviour about prevention and responsiveness towards this health issue shows we are dealing with a big problem,” she continues.

According to Letsike, one of the problems in curbing STI rates is how we talk about condom use in South Africa — especially prioritising HIV prevention strategies in a silo. This, in turn, means that conversations about other STIs, such as gonorrhea, syphilis, human papillomavirus (HPV) and chlamydia, are relegated to the fringe of public healthcare discourse and services.

“We need to emphasise that talk on the prevention of STIs has largely taken a back seat.” She adds that South Africa needs to have a more focussed effort about STI prevention. “That for me is non-negotiable, and strategies to prevent STIs must be taken into account, as this is an advancement of HIV treatment, and HIV-prevention itself,” says Letsike.

Condoms, both internal and external, have high efficacy rates in pregnancy prevention, but due to the wide array of STIs that are contractible, condom efficacy fluctuates according to the type of disease. For example, a person is almost 100% protected from HIV by internal condom use, but with HPV, the virus can infect areas that aren’t covered by the internal condom. The risk is lowered through condom use, but doesn’t entirely fall away. Internal condoms, which are commonly known as female condoms or femidoms, can be used vaginally or anally, and external (or male) condoms are used with sex toys, or over a penis.

‘Give women power to protect themselves’

Letsike says that, although workshops promoting proper condom use and awareness are happening, STI numbers in rural areas are rising fast.

Pulane Mangena, from Topanama village in Limpopo, believes that internal condoms need to be widely available for better condom use, and lower rates of sexually transmitted infections in her village.

“More female condoms need to be dispersed to the public to give women power to protect themselves during sexual intercourse. You can’t collect female condoms from the clinic where I’m from, but male condoms are everywhere,” Mangena says.

She says people in her village use condoms to prevent pregnancy effectively, but they don’t know much about STIs, since there are no STI awareness programs in the village.

“Women here use condoms because they are scared to fall pregnant, which shows that they fear pregnancy more than STIs. That’s why I’m saying that more awareness campaigns are needed to educate people,” she explains.

Heterosexual women often struggle to convince their sexual partners to use condoms — this can be exacerbated when they’re in romantic relationships. A 2017 study published in the Global Health Action journal found that although women reported negotiating safe sex in their relationships, they feared the possible consequences of insisting on using condoms with their partners.

To make matters worse, girls and young women are significantly more affected and infected by HIV. According to South Africa’s latest HIV plan, girls and women between the ages of 15 and 24 have the highest rate of new infections.

Despite this, male condoms are still more readily available than female condoms in public health facilities and a pack of two Cupid female condoms retails for about R40. This is because the cost of making one female condom is nine rands as compared to approximately 30 cents for one male condom.

Mangena further adds that the government needs to intensify their campaigns on internal condom use by regularly visiting schools to teach learners about the importance of barrier preventative measures. She said clinics should be youth-friendly platforms to start discussions about sexual and reproductive rights at an early age.

The country’s National Strategic Plan (NSP) lays out the action plan for public healthcare services until 2022, and with STI prevention appearing in five of the eight NSP goals, it shows that it’s a significant public health issue. The NSP groups STIs, Tuberculosis (TB) and HIV together.

According to Letsike, STIs are one of the major focus areas for the NSP and part of the plan is looking at what interventions are needed to address HIV, TB and STIs — often interventions are combined, or implemented in tandem, to deliver high impact responses.

Letsike says the country is not doing well in reaching the NSP STI target, as the 2017 report estimated that South Africa has about 2.3-million cases of gonorrhea. “These are high volumes of STIs, and they are due to inadequate prevention,” notes Letsike.

He says some people with STIs, such as chlamydia, go untreated because it doesn’t show clear symptoms. Left untreated, people with chlamydia can infect other people without even knowing they have an STI.

According to the NSP report, the STI targets of can’t be met by only treating symptomatic STIs. Screening for asymptomatic STIs needs to be scaled up, especially in pregnant women, adolescents and people living with HIV.

Other ways the NSP hopes to reduce STI rates are integrating STI screening into existing programmes such as anti-retroviral treatment and TB screening, and antenatal screening. STIs, such as syphilis, can be transmitted from pregnant mother to child, and so antenatal screening is also of importance. The accessibility of STI-related services for men needs to be improved through mobile outreach and extended hours for STI service providers.

While eradication of STIs on a national level shows slow progress, OurHealth journalists looked at implementation strategies on a provincial and municipal level.

In Limpopo, spokesperson for the Greater Tzaneen Municipality, Neville Ndlala, says STI and HIV-rates are higher in the Tzaneen region, as compared to other municipalities in Mopani. But, says Ndlala, they are doing their bit in implementation of the NSP.

“We work closely with the local Aids council to discuss the challenges they are facing in terms of STI, HIV and condom usage,” says Ndlala.

In the North West, plans to increase the rollout of condoms across the province are in place, with the aim of increasing detection and treatment of asymptomatic STI’s by 50% in 2020. This is according to the province’s implementation plan on HIV, TB and STIs.

Letsike maintains that it’s important to redirect resources from bigger organisations to local NGOs, schools and health facilities so that local interventions can reach more people. However, in some municipalities, financial resources are an issue impeding widespread and quality implementation of the NSP objectives. Ingquza Hill Municipality in the Eastern Cape, says that they lack the budget to truly tackle STI rates and increase condom use. However, they do take part in all awareness campaigns mandated by the Department of Health (DoH).

“We embark on all awareness campaigns that are led by the DoH, through the primary health re-engineering program, but  the main challenge is financial resources,” says Vukile Tukani of the municipality.

In Gauteng, the Atteridgeville municipality says their programs stick to the objectives of the National Strategic Plan. The municipality facilitates door-to-door AIDs education programs to bring education and awareness to resident’s doorstep.

One of the peer educators in this program, Tshogofatso Mokgosi, argues that although the program is informative and covers a wide range of issues and myths surrounding HIV, STIs and TB, residents sometimes don’t cooperate.

“The only difficulty we face as peer educators, is lack of cooperation from some households. They refuse entry into their yard, and often have a negative perception about condom use. But to counter this, we also leave free condoms in local stores,” Mokgosi explains.

“The youth should know that condoms don’t only prevent unplanned pregnancies, but also other diseases that are sexually transmitted.”-Health-e News