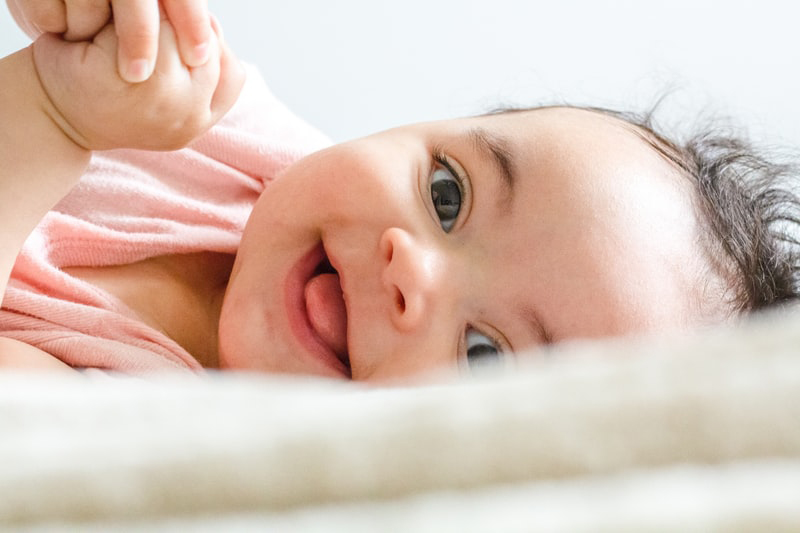 Childhood leukaemia is the most common type of cancer in children however it is rare in children younger than a year old. (Photo by Daniel Thomas on Unsplash)

She especially hopes her baby, Mahi, will be given a future through a donation after being diagnosed with leukaemia at just over three months old.

Leukaemia is a cancer of the blood and bone marrow involving an uncontrolled increase in white blood cells (leukocytes). According to the Global Cancer Registry, nearly half a million new cases of leukaemia were reported in 2020; a total of 311 594 (62%) succumbed to the illness.

Mahi Jithoo is an 8-month-old baby girl described as a child full of energy and smiles and is a busybody of note. She was diagnosed with leukaemia when she was just three and a half months old.

Her mother, Surashna Jithoo, said that her daughter didn’t have many symptoms prior to her diagnosis. She explained that when Mahi began feeling sick, she had a fever and diarrhoea for exactly a week.

Childhood leukaemia is the most common type of cancer in children however it is rare in children younger than a year old.

“Finding out that she had leukaemia turned our whole world upside down. We were devastated and worried about the hard road ahead for our tiny little baby. Nothing can prepare parents for a doctor informing them that their baby has cancer,” said Jithoo.

the five foremost childhood cancers in South Africa are:

Mahi was diagnosed with Acute Myeloid Leukaemia (AML). This type of leukaemia begins in the bone marrow and as the cancer grows, it spreads through the bloodstream and the body. According to Healthline, about 70 cases of infant AML are diagnosed each year.

Since Mahi’s diagnosis, life has changed for the Jithoo family.

“Life has changed drastically. She has spent more time in the hospital than she has at home. This also means that she and I have long stays at the hospital while Pranesh [Mahi’s father] is home. We all miss each other terribly, and we’re all on high alert about any changes to her mood, physical appearance etc. So that we can react quickly if she needs medical attention,” said Mahi’s mother.

The biggest challenge for Mahi has been infection. Because of the abnormal white blood cells formed in the bone marrow, this raises the body’s chances of infection and other problems. During block 1 (first stage of chemo?) of chemo Mahi picked up anantibiotic-resistant, hospital superbug. Mahi’s mom explained that she almost lost her daughter to this infection in block 1.

The common treatment among patients diagnosed with blood disorders is to eliminate unhealthy cells through medical treatments such as chemotherapy and radiation. In high risk patients or in patients who have cancer relapse, a blood stem cell transplant is then required.

“Treatment has been challenging to say the least. With every block of chemo we go through, Mahi struggles to recover from the effects of chemo and from infection. Against all odds, she makes it through and gets to come home for a brief period of recovery before we go back to hospital for the next block of chemo,” said Jithoo.

The Jithoos need to look outside the family for a donor match. The family has been looking for a donor since the end of May but unfortunately, Mahi has had no local matches from the registry.

“This was a devastating blow to us, because it means waiting until a donor is found. Until then, our little girl will have to undergo more chemo to keep her cancer at bay, until a donor is found. The wait has felt a lot longer than it is, and it’s been very hard to watch Mahi struggle through her chemo treatments,” said Jithoo.

Strangers given a second chance

“The process of donating bone marrow might seem daunting but it is a small inconvenience compared to that of the patient, their immediate family and their suffering. Whether you donate to increase the lifespan of a patient or contribute to a full recovery, either way you are giving a complete stranger a second chance at life,” said Ward.

Ward continued: “Blood cancers have been on the increase globally over the last decade so awareness and early detection is key to survival. Thousands of patients are diagnosed with leukaemia or blood disorders in South Africa every year and in most cases, their only chance of survival is a bone marrow stem cell transplant.”

“As a mom, I have more of a plea than a message. My plea is to encourage people to register. The process is simple and the procedure is non-invasive. Please consider being the future that our Mahi needs. Without a donor, she doesn’t have another chance at being able to grow into the person she is,” said Jithoo. – Health-e News