With a name like “Nurse,” Nurse Simelane seems destined to make a difference in the lives of others. OurHealth spoke to Simelane and her patients about what home-based care means for them. 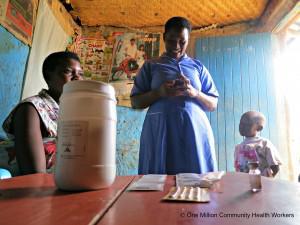 Simelane is from rural Madabukela near Piet Retief in the province’where schools and jobs are scarce, says the 31-year-old community health care worker with the Zamokuhle Home-Based Care organisation.

Madabukela lies in the province’s Gert Sibande District, in which about 40 percent of pregnant women are living with HIV, according to the country’s most recent antenatal HIV survey.

Growing up, Simelane saw many around her die from AIDS-related illnesses and tuberculosis and says it led her to make a promise to herself.

“I knew by then that my dreams involve saving lives and helping those who are in need,” she told OurHealth. “I made a pact growing up that if I had an opportunity given to me to (join) one of the community home-base care groups, that I would join in a heartbeat.”

At the age of 24 years old, Simelane was given that chance and joined Zamokuhle Home-Based Care. That was seven years ago and she hopes that she will have many more years to come with the group.

As part of her work, Simelane works to close the gap between rural patients and far off clinics.

“Because some of our rural communities doesn’t have clinics which are nearby, people living with HIV, TB and other diseases find it difficult to attend the clinics as regularly as requested to by the health care workers,” she said. “Since I became one of the home-based carers, I have been assigned to support patients from the KwaNgema, Entombe and Kwamgodzi communities.”

A day on the job can include everything from supporting patients to stay on treatment, delivering chronic medication to patients’ doorsteps or counseling patients about the dangers of mixing some medications with traditional medicines.

She also says about three decades into South Africa’s HIV epidemic, some continue to mistakenly believe that traditional medicines can cure the virus.

What’s between patients and pills? The bottle

Substance abuse also continues to be a major challenge among patients on antiretrovirals (ARVs).

“Substance abuse is one of the reasons why some of our clients are defaulting because when the consuming too much alcohol they have the tendency to forget to take their ARVs on time,” she added.[quote float=”right”]”This month to some is about celebrating and using 67 minutes to giving back to communities but for me giving back is my daily life’s work”

Fikile Dlamini from KwaNgema has been living with HIV for almost six years.

People living with HIV are at an increased risk of developing active tuberculosis (TB) and the Department of Health estimates that about 60 percent of TB patients are co-infected with HIV.

Last year, Dlamini became one of them. Simelane helped him stay on TB treatment.

“The clinic had to put me on treatment again and the home-based carers have been supporting me,” he said.

While patience is a virtue, Simelane admits she gets frustrated with patients like Dlamini.

“Being human, some days I get frustrated because some clients don’t take HIV, sexually transmitted infections and TB seriously, but that wouldn’t make me abandoned them because they have become my friends and family,” she added.

Nurse Steven Ndlangamandla says home-based carers like Simelane play a crucial part in helping trace patients and making sure patients stay on the treatment they need to get better.

“Working with Zamokuhle Home-Based Care has made things easier at our side because our patients are traced and brought back to the facility,” he said. “(The carers’) hard work must be highly appreciated because without them more patients would continue defaulting and eventually die of AIDS-related illnesses.”

For Simelane, every day is Mandela Day.

“This month to some is about celebrating and using 67 minutes to giving back to communities but for me giving back is my daily life’s work,” she told OurHealth. “We should teach ourselves to give back our time every day.”