According to South African Depression and Anxiety Group a fifth of all South Africans will experience a depressive disorder at least once during their lifetime.(Photo Credit: Helen Harrop/ Flickr)

A man alleged to have raped a 13-year-old cancer patient has been apprehended after spending months on the run.

Man to be charged with rape of cancer patient 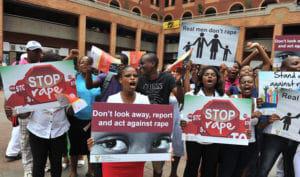 His arrest comes after the child admitted to nurses that he raped her on four occasions after it was discovered that she is both pregnant and HIV positive as a result.

“My daughter’s life will never be the same because of what happened to her. This man has completely destroyed her future and he deserves to rot in jail,” said the girl’s mother, a 49-year-old widow from Tokyo section in Tsakane, Ekurhuleni.

The devastated single mother received the shocking news from social workers at Charlotte Maxeke Academic  Hospital last September when they contacted her about her daughter. The girl has been a blood cancer patient for eight years, so the mother’s immediate reaction was to think that her daughter’s condition had deteriorated.

“On that day she had gone for her treatment as usual, so when I saw that the call was from the hospital I immediately that her condition had gone down because she had been sleeping a lot and not eating properly.”

The anxious mother rushed to the hospital and on her arrival, she was told that her daughter had been sexually assaulted.

“The social workers said the doctors found that my child has been raped. I was so angry. They said my child had told them that the person who did it was our neighbour – someone we know very well. The hospital then advised me to go and report the case at the police station,” the mother said.

Raped and infected with HIV

The child said that the suspect, who is in his early forties, had raped her more than once.

“The first time it happened it was in December 2015. He called me to his house and once I was inside he locked the doors and ordered me undress and raped me. He has raped me four times. I was scared to tell my mother because he said he was going kill the both of us if I tell anyone,” the girl said.

Doctors treating her did a full examination and found out that the girl had contracted HIV and had fallen pregnant.

Doctors treating her did a full examination and found out that the girl had contracted HIV and had fallen pregnant.

“It broke me as a parent when I was told that my child is pregnant and HIV positive. As a family we decided to ask for the termination of pregnancy because with her condition she was not going to be able to carry,” said the mother.

Suspect on the run

She reported the case and when police went to the suspect’s home, his family said they did not know where he was.

“They told the police that this man he longer stays with them and has moved to Mpumalanga. But I knew that they were hiding him. Two weeks later someone called me to say they would give me R20 000 if I dropped the charges,” said the mother.

Treatment Action Campaign (TAC) provincial chairperson, Fikile Mtshweni the organisation was against domestic and gender-based violence and was offering the 13-year-old and her family their full support.

“As the Kwatsaduza (Kwa-Thema, Tsakane, Duduza) branch we will visit the family regularly. We believe that justice should be done and the offender should receive a sentence that he deserves,” said Mtshweni.

Over the past few months police have continued their hunt for the suspect. According to Captain Johannes Ramphora, spokesperson for Springs SAPS, detectives were eventually successful and arrested the man.

“We looked everywhere for this guy and even went to his workplace. At one stage he called the mother of the child saying that he was sorry and wanted to apologise and the family. She tipped off the police and that is how we eventually caught him,” Ramphora said.

The suspect has been arrested on allegations of rape. He is set to appear at the Springs Magistrate’s Court on January 26, said Ramphora.