About nine women die every day as a result of cervical cancer in South Africa. A new, do-it-yourself test could help detect more cases earlier but it’s only part of the solution, experts warn. 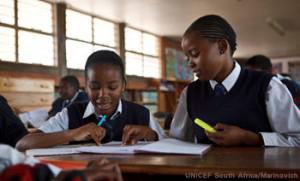 Cervical cancer is caused by human papillomavirus (HPV), a common sexually transmitted infection that nearly all sexually-active women contract at some point in their lives. Usually, HPV remains dormant or clears up naturally but it can progress to cervical cancer.

Regular screening through pap smears and HPV testing can help women detect HPV and cervical cancer early, but few go for regular check-ups. Only 20 percent of South African women have ever been for a pap smear.

But a new home-based HPV test, called UDoHPVTest, could help increase access to HPV testing – at a price.

The test is the latest product from Johannesburg-based UDoTest home testing firm, which offers take-home tests to diagnose HPV as well as other sexually transmitted infections like gonorrhoea and chlamydia.

While South African law does not regulate self-tests like these – provided they are not sold in pharmacies – UdoTest’s products have been aproved by the US regulator, the Food and Drug Administration.

According to UDoTest Managing Director Allison Martin, UDoHPVTest is the 21st-century answer to low uptake of pap smears.

“There are many reasons why women across the world decide not to get screened and these include education, cost and access to medical practitioners,” Martin told Health-e. “Our test aims to remove some of these barriers.”

“Women can collect their own samples in the comfort of their homes, and have it analysed in an accredited pathology lab,” she adds. “It’s as easy as buying airtime.”

The UDoHPVTest is available online to women older than 30 years of age and costs R699, excluding delivery.

Once a woman places an order online, a testing kit is delivered to her home. She then has 24 hours to self-collect her sample before UDoTest returns to collect it for testing.

In about ten days, a woman receives her results. Should a woman test positive for HPV infection, UDoTest offers her up to eight free face-to-face or telephonic consultations. According to Martin, the company also offers women a list of local gynecologists with whom UDoTest can book them a follow-up appointment.

According to the website, nearly 1650 women have already purchased the test online.

But experts doubt that the UDoHPVTest will reach many of South Africa’s women.

“This is a good test and the idea that women can perform a test in the privacy of their own home, without the invasiveness of a doctor’s room, is fantastic,” says Leon Snyman, professor at the University of Pretoria’s Gynaecologic Oncology Unit. “However, the availability of this test on its own will not alleviate the problem of cervical cancer in South Africa.”

“Women of poor socio-economic status are the most vulnerable to cervical cancer because they cannot access screening or treatment,” Snyman told Health-e. “To effectively reduce deaths, we need to have a population-based screening programme in place.”

Currently, women over the age of 30 years can only access one free pap smear exam about every ten years in the public sector. Even under these limited guidelines, government continues to lag behind on its goal to screen 70 percent of eligible women screened by 2014.

Snyman added that really benefit the bulk of South Africa’s women, the YouDoHPVTest would have to be linked to a larger campaign.

“The UDoTest can make a difference to more women if it is part of a population-based screening programme or if it is linked, for instance, to the cervical cancer vaccination programme that will hopefully be implemented next year in some schools,” Snyman says.

Health Minister Aaron Motsoaledi announced plans for a school-based HPV vaccination campaign earlier this year. Estimated to reach more than 520,000 girls between the ages of nine and ten years old, the campaign will begin inoculating girls against several cancer-causing strains of HPV as of next year. – Health-e News Service.