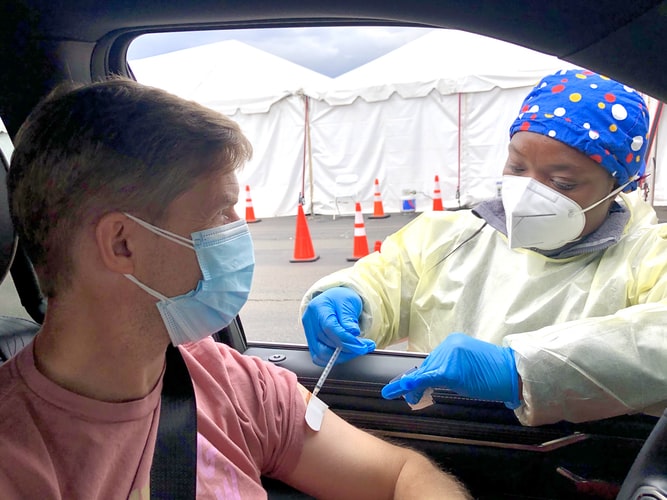 Discovery’s decision to implement mandatory vaccination at its workplaces from early next year has irked Cosatu, South Africa’s largest trade union, forcing them to weigh in on the controversial matter.

The group announced last week that all employees would be required to be vaccinated by January 2022 and if they object, they’d be summarily dismissed.

Cosatu – with 21 affiliate unions under its umbrella representing millions of workers – cautioned companies from forcing and threatening workers to be vaccinated against their will. This, however, hasn’t stopped them from encouraging their members to get vaccinated.

”We are totally in agreement with vaccination. People must be vaccinated, but employees must not be dragged screaming and kicking to be vaccinated. That we object to. Employers must not take advantage of the desperate situation workers find themselves in and the fear of losing their jobs. Workers have rights also and these rights should be respected,” said Parks.

”Employers must realise that workers work for them but they don’t own them. Workers have individual rights enshrined in the Constitution and these rights ought to be respected, This is a conversation we need to have. We also need to remind each other that there are limits, and the private sector has no unlimited power to force workers to vaccinate. Employers have no rights to impose whatever virtous ideas they have on the workers,” said Parks, adding that government must come up with some kind of communication plan that would persuade anti-vaxxers to change their minds.

“We must not be misunderstood here – we are fully behind vaccination and we support and encourage our members to be vaccinated, but those for some reason known to them, who dont want to vaccinate, should be persuaded somehow. We know it’s the right thing to do. Cosatu feels and maintains government should come up with a different approach and communication strategy to persuade those who are sceptical,” said Shingange.

We call on all #workers are being victimized over vaccinations to report their employers, to any #COSATU office or those of its affiliated unions, the @deptoflabour and the South African Human Rights Commission @CCMA_SA @SABCNews @Radio702 @Powerfm987 @CapeTalk @JacaNews @eNCA pic.twitter.com/DOvQlIswSu

Discovery says there will be exceptions such as for religious and cultural purposes. The company says its a moral and legal position to take, adding that the response among its workers was ”overwhelming.” although there is a ”small group” which remains sceptical. 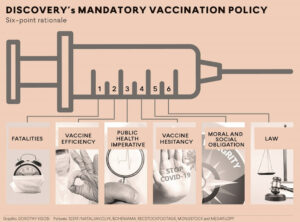 Discovery Health CEO, Dr Ryan Noach, said the company would do its best to accommodate all workers.

”It will be on a case basis. If we fail, unfortunately we will be forced to part ways,” said Noach, adding that in reality, the company wanted all its employees vaccinated, even future employees.

Noach confirmed that about three quarters of Discovery’s customers over 60 years were vaccinated. Some business organisations such as Business Unity South Africa (BUSA), are in support of compulsory vaccination like Discovery.

She was responding to Dr Siva Pillay, a member of the Eastern Cape COVID-19 provincial command council, who predicted earlier this week that hospitals might start rejecting unvaccinated patients to protect healthcare workers suffering from fatigue.

Dr Wagner said Dr Pillay might have been expressing his own personal and individual views, adding that it might have been said ”possibly from a position of frustration having just dealt with the third wave”.

”The management of the pandemic has really taken its toll on the physical and mental wellbeing of our healthcare workers across the world, and certainly our country and province has not been immune to this impact,” said Dr Wagner.

She added: ”It would, however, not be responsible to take such a position ethically, as a health professional or as a healthcare service. The country is still discussing vaccination as a mandatory requirement for employees.”

Dr Pillay, a well-known health expert in the Eastern Cape who once served as head of the provincial health department, is quoted as having said: ”It will start off with unvaccinated people not being allowed inside a stadium or restaurant. Then, what is stopping a hospital from doing the same thing? If something is going to prevent you from dying from COVID-19, why would you refuse to take it?”

The latest Eastern Cape epidemiological report, dated 5 September, made available to Health-e News by Dr Wagner yesterday, states that of the 1 158 people hospitalised in the province, 135 are on a ventilator.  The report also reveals that those who are not vaccinated, are the ones who end up gravely ill in hospital and on ventilators. – Health-e News