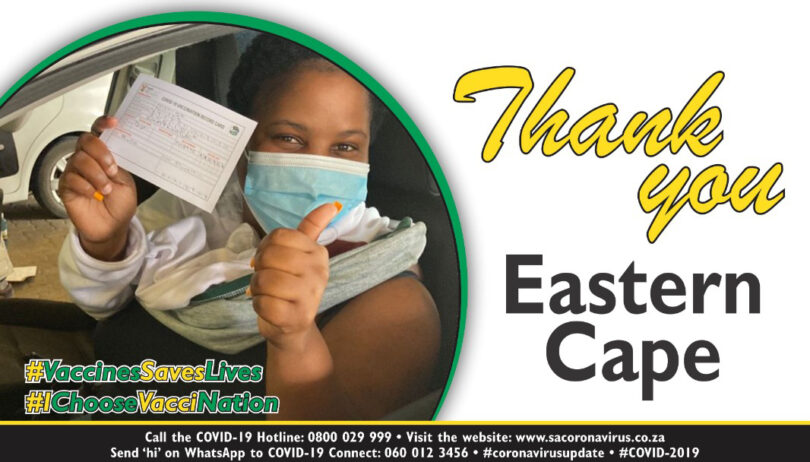 The Eastern Cape provincial government is celebrating a milestone which has seen at least one million people having received their COVID-19 vaccinations. This means the province is a step closer to reaching populating immunity by next March.

By Thursday last week (16 September), a total of 1 002 813 people had been fully vaccinated out of a population of six million. Adding to the relief, are the promising numbers coming from the vulnerable group, 60 years and plus, which accounts for the largest percentage at 62%.

”This is a big achievement for the province, but as a department we still have a responsibility to encourage those eligible to come forward for vaccination,” said health MEC Nomakhosazana Meth.

”This milestone contributes towards the province attaining population immunity by innoculating 4.5 million of its population by the end of March 2022. Of the vaccinated population, about 43 385 are healthcare workers have received their jabs.”

She said the Eastern Cape continues to make strides toward reaching a broader community of the province by implementing intensive vaccination awareness campaigns.

”Our community-based vaccination programme which includes pop-up vaccination sites at shopping malls, Sassa paypoints, mobile units, community halls and churches, ensures that services are brought closer to the people. This is particularly important in a rural province like the Eastern Cape where many communities live in far-flung areas of the province,” said Meth.

The province’s vaccination drive has also been given a boost by the arrival of the Transnet vaccine train – Transvaco – that will travel to communities along the rail corridor in order to expand the reach of government’s vaccination programme. The train will be stationed in Gqeberha until September 24 before moving to East London with Komani being the last stop in December.

How cool is this?
🚆BOARD THE TRANSNET VACCINATION TRAIN – TRANSVACO & GET VACCINATED!
Coming this Tuesday 14 September to Gqeberha & will be at Swartkops Train Station from 14 to 24 September

Come NMB get your vaxx pic.twitter.com/qO4XEjywQy

Meth expressed her appreciation to the Eastern Cape community for responding positively towards the drive, and called on those eligible for COVID-19 vaccinations, to come forward and receive the life-saving jab. She also extended her gratitude to the healthcare workers for their commitment and bravery in combating the pandemic, often in tough conditions.

”We are grateful for our devoted healthcare workers who have shown courage, persistence and dedication. We want you to know that your sacrifices mean a great deal to the province. We truly are thankful,” said Meth, adding that currently the province has more than 8000 active COVID-19 cases. More than 14 000 people have lost their lives to the virus since the start of the pandemic in March 2020.

Health-e News spoke to three Gqeberha residents, all of whom expressed positive thoughts about the COVID-19 vaccinations.

Mandla Makasi, a 40-year-old factory worker, said he was surprised that some people are still questioning the efficacy of the jab.

”I was among the first at work to register for the vaccination. Why should I not protect myself when there is a vaccine? I am still surprised that some people don’t want to vaccinate. It does not make sense to me. I didn’t feel anything while being vaccinated, not even the prick,” said Makasi.

Gift Jacobs, 35, who is unemployed, said that if a booster jab is needed, he’ll definitely go for it.

“I have told my anti-vaccine friends to get the jab. I don’t understand why they doubt the vaccine, but when they are sick with other ailments, they rush to hospital. People must just go so that we can all be safe,” said Jacobs.

”At first, I was also sceptical,” said  55-year-old Simphiwe Manzi.

”I was listening to some people who were saying a lot of bad things about the vaccine, but after careful consideration, I decided to go and vaccinate. The jab saves lives. It’s  those people who do not want to vaccinate who will kill us now. Everyone should be vaccinated so that we are all safe,” he said. – Health-e News