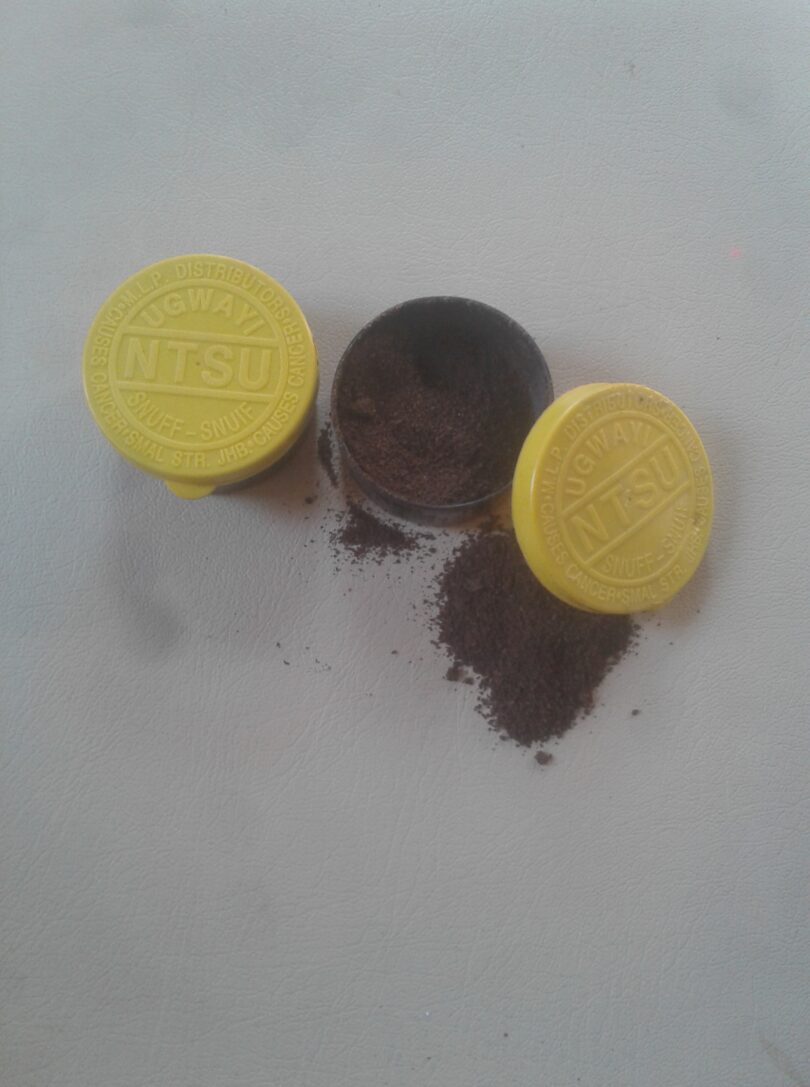 Used by elder citizens to call on their ancestors, ntsu is being used more and more by the youth, often leading to addiction. (Photo: Supplied)

Ntsu, once used exclusively by traditional healers to connect with their ancestors, is gaining popularity among youth who are struggling to resist this form of smokeless tobacco.

Young women in KwaZulu-Natal have especially taken to ntsu, which is usually sniffed through the nose or placed on the lower lip.

Nomagugu Zungu* shared her story with Health-e News about how she got addicted to this easy-to-access drug.

“I call it a drug because it has drugged my life, my mind, and even ruined my relationship with my partner who was going to marry me,” said Zungu. Her then-boyfriend broke up with her after he discovered she’d started using ntsu.

“I didn’t mind at first, but as time went on and years passed, I realised that I had lost someone I loved because of this drug,” she added.

“But sometimes I would comfort myself and think that maybe our relationship wasn’t meant to be. I thought that perhaps he didn’t love me the way I loved him because if he did, he would’ve stopped me from using and helped me since I was addicted.”

Sboniso Nene, a health practitioner, said ntsu is a smokeless tobacco that contains nicotine, which may lead to addiction. Ntsu users are also more likely to become cigarette smokers.

“If consumed orally, it may cause mouth, oesophagus, and pancreas cancer. Like cigarettes, ntsu may also increase the risk of death from stroke and heart disease. Other health issues include bad breath, stained and decaying teeth, sores in the mouth, tooth loss, and receding gums,” explained Nene.

Dr Zezulu Macingwane, a traditional healer, said ntsu had been around for a long time, and it was predominantly used by senior citizens and those with an ancestral calling. But now, he said, it’s surprising how youth use it, especially young girls.

“It is a shame; this shows that we are now living in the last days,” said the healer.

Zungu said it’d been five years since she started smoking ntsu, also known as snuff. She explained how she inserted it in her lower lip for over a minute. After that, she spits it out after getting the desired effect which she describes as feeling “good and dizzy”.

“It’s like you are on top of the world. I usually become more active and hyper after using it,” said Zungu.

“I have tried several times to quit, but I couldn’t since the rest of my friends are all addicted to it. So it makes it difficult for me since I still hang around with people who use it often,” she added.

Zanele Mlambo also confirmed that it’s not easy to quit. The mother of two said she started using ntsu seven years ago after she was introduced to it by her sister and through social media.

Ntsu and the vagina

“I heard it does wonders if you insert it into your vagina before sex with your male partner. I then asked my sister about that, and surprisingly, she confirmed it. The reason why I asked her is that she was smoking it,” said Mlombo.


“I then tried to insert it in my vagina as instructed. It was itchy at first, but it becomes normal once you get used to it. I can tell you that my partner keeps coming for more, and our sex life is way better than before,” claims Mlambo.

But Nene warned inserting ntsu into the vagina could lead to cervical cancer. If pregnant, it increases the risk of premature labour.

Nene said that if ntsu users progress to cigarette smoking, the risk of death from heart and stroke conditions increases.

Quit now before it’s too late

When Health-e News asked Nene about his thoughts on written warnings on ntsu, he said people must be warned it can kill them.

“Cigarettes and ntsu both contain nicotine, and they both cause the same types of cancers. I believe snuff users are unaware of how dangerous it is to their health,” he reiterated.

He added: “We need to embark on awareness campaigns targeting schools to assess young adolescent girls and women who seem to be consumed by the use. We must raise awareness about teratogenic smokeless tobacco so that our people make informed decisions.”

Nene also said that the National Department of Health, like its “She Conquers/Dreams” campaign, should focus on ntsu awareness.

“For now, I strongly advise those using it to quit. Ntsu is dangerous. Please quit and be rehabilitated,” advised Nene. – Health-e News