Home » Rural Reflections: There is a problem

Millions at risk due to supply challenges caused by COVID-19 .(File photo)

As public debate rages about whether there are or are not antiretroviral (ARV) stock outs in the county, our rural doctor and blogger reminds us what three letters and ARV stock outs really mean.

Rural Reflections: There is a problem 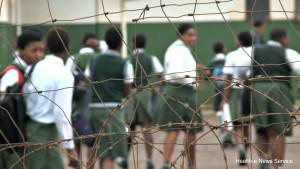 This week, our rural doctor diagnosis a 13-year-old child with HIV during pregnancy. The girl says the man ten years her senior that she was sleeping with never told her he was HIV positive. (File photo)

This week I met a 19-year-old boy in my outpatients cubicle… He was tall and lanky, sporting skinny jeans, Converse All Stars and a flat cap – and his English was better than my IsiZulu.  He came into the doctor’s room with a host of sexually transmitted infections and no HIV.

He was worried about his genital ulcers and his urethral discharge.

I was worried about the fact that his worry list didn’t contain those three letters: H-I-V.  He’d tested for HIV and the results in front of me were negative – but so was the blatant evidence that he wasn’t protecting himself from chlamydia and gonorrhoea – HIV’s partners in crime.

This week I had three children between the ages of one and three years old who were recently diagnosed with HIV and started ARVs in the ward.  One of them was too small to speak,  she just looked at me with milky brown eyes as her gogo tried unsuccessfully to console her malnourished cry.  Her mom had passed away and they didn’t know that the mother had HIV, her gogo explained,

They also don’t have a child support grant or an income.

When mothers are children and viruses are inheritances

Last week, a 13-year-old girl tested HIV positive five days before delivering her baby.  She lied to the nursing staff and said that she was 15.  She was only started on ARVs as part of the prevention of mother-to-child transmission programme a few days before delivery.

Starting late on ARVs meant the amount of HIV in her blood was high through her pregnancy and delivery – increasing the risk that her unborn baby would contract the virus.

[quote float= right]This wriggling, pink tiny human now had a chronic medical condition that he for which he’d have to receive lifelong medication”

I met her when her newborn son was admitted to the neonatal nursery with neonatal sepsis, or an infection in her bloodstream. The baby was started on the ARVS nevirapine and zidovudine to prevent mother-to-child transmission of the virus while I tested him for HIV. These ARVs work to help protect him both from any HIV he was exposed to before or during birth, but also from any that may be in his mother’s breast milk.

I found out five days later when the blood results came back that the baby boy had contracted HIV before or during birth. This wriggling, pink tiny human now had a chronic medical condition that he for which he’d have to receive lifelong medication.

So start the baby on ARVS… and what? Send the teenager home to her parents who know nothing of her HIV status with three 500 ml bottle of ARVs to give to a baby twice a day? She would go back to school and then who would bring the baby to all the follow up visits and blood tests to check that the ARVs weren’t damaging his liver or blood?

Then she said her stepfather would chase her away if he knew her status.

Then she said her mother was an alcoholic.

Finally, we phoned her mother and the young. new gogo came in to the hospital, two weeks after her daughter had given birth to this beautiful baby boy.  She smelt of the local brew.

The gogo would help take care of the new baby. The only income in the house was this new mother’s own child support grant that the gogo was receiving for her 13 year old daughter now mother of one.

Can you default when there are no drugs?

An 82-year-old woman was brought in by her family.  She complained of two weeks of vomiting and diarrhoea.  She was also coughing, and becoming confused.  Her skin was dry and floppy, lacking subcutaneous tissue.

[quote float= right]I am sorry to the pregnant woman who I saw today who is on abacavir and alluvia, with a virus unsuppressed in her blood and a growing foetus in her womb”

I asked a few questions from her family while feeling her weak pulse and beginning to insert a drip into her dehydrated veins, taking some of the dark purple blood for baseline tests.

She’d been in and out of hospital many times in the last few years I realised as I paged through her dog-eared patient held clinic card that all our patients carry with them with all their medical records. It said, “RVD +, known defaulter. Previous TB X3.”

It was clear that she had HIV, and had stopped and started her ARVs many times putting her at risk of the ARV resistance. She had also had tuberculosis (TB) three times before.

The family said that she didn’t take her medication because she didn’t like swallowing her pills, they stuck to her throat, they made her feel nauseas – she’d been taking them for too long.

I tried to discreetly step back a couple of steps and reach for a TB mask to secure around my mouth and nose before listening to her chest rattle. I hoped strep pneumonia was the culprit and not TB once more, or worse, multidrug-resistant TB.

Earlier this year there was a shortage of abacavir, one of the second line ARVs that we treat patients with.  Some unfortunate patients effectively defaulted on one of their three, daily ARVs for no fault of their own.

The clinics ran out of abacavir and then the province ran out of abacavir.  We waited for the new financial year, the new tender… and bent the protocols and treatment guidelines until it happened- to make sure that patients are at least receiving something that will prevent drug resistance or treatment failure.

Abacavir returned, the crisis was over.

Then there was no aluvia, another ARV also used as part of second-line HIV treatment.

There is a supply problem, there is no time scale in terms of a solution, we are told.

I am sorry to the pregnant woman who I saw today who is on abacavir and aluvia, with a virus unsuppressed in her blood and a growing foetus in her womb.

I don’t think it would be forgivable if our lack of medication were to result in her inability to access drugs to prevent her baby from being born with this preventable, incurable condition.

I write out another prescription, in the hope that this week things might change.

An edited version of this column also appeared on Health24.com